. . . or a 1/64th or so Indian Native American. It seems that Elizabeth Warren has hurt feelings over mean nasty conservatives questioning whether the Cherokee blood she claimed from her great grandfather, to get into law school and to be hired as a faculty member was real. 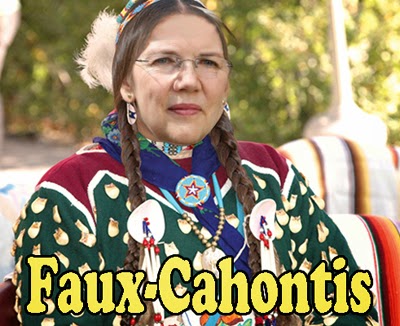 Ace: Elizabeth Warren Angry That People Challenged Her Claims of Being a Cherokee


U.S. Sen. Elizabeth Warren recounts in her new autobiography that she was “hurt” and “angry” by news reports that there was no documentation to support her claims of her family’s Cherokee heritage in the 2012 Senate race, according to a published report.
“What really threw me, though, were the constant attacks from the other side,” Warren wrote, according to Politico.com...

...
Efforts to reach a Warren spokeswoman yesterday were unsuccessful.

She once again makes the maudlin, manipulative claim that by challenging her use of her "minority" status for professional advancement, people were attacking her dead parents, who, she alleges, told her this silly story.

Of course, they never told her "And be sure to check off the 'minority' box in each and every job you apply for or land."

Howie Carr has a simple suggestion as to how to resolve this controversy: if Elizabeth Warren will just be so kind as to swab the inside of her (high) cheeks with a DNA sample swab, he'll pay for a DNA test out of his own pocket to determine if she's a Cherokee.


It’s easy. Just swab the inside of your mouth. Check my photo on the left, I’ll show you how to do it.
No more of this fact-free nonsense about your “high cheekbones,” or these ridiculous fables about your parents “eloping” to escape the racism of the Indian Territory when they actually returned to their hick hometown that same evening for a traditional wedding party.
The only explanation you haven’t trotted out yet is that you instantly knew you were an Indian when you first heard Cher on the AM radio belting out “Half Breed.”
It would be great publicity for your new 2016 presidential campaign book if you finally come clean. Plus, what’s the downside, if you’re so positive that you really are an Indian princess?

Funny, but such a test would probably help her. It's quite possible she has 1/64th (or was it 1/128th?) Cherokee blood. It's even possible her parents told her stories of her distant, attenuated Cherokee ancestor. I'm told such legends are commonplace in Oklahoma.

But to claim to be a minority for professional advancement based upon such a tiny amount of minority status?

There's no simple DNA test for shamelessness and cynical careerism. 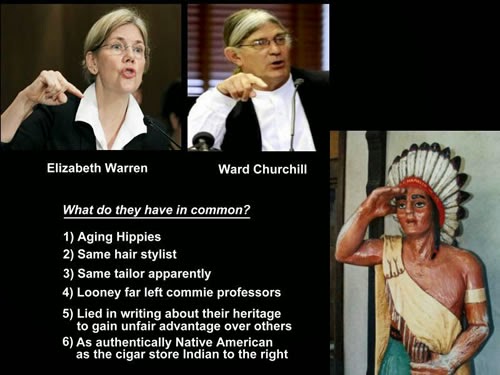 
In her new book, Elizabeth Warren blames the controversy over her fake Cherokee ancestry on “some blogger,” and since William Jacobson of Legal Insurrection was particularly merciless in exposing her lies, he’s giving credit where credit is due:


In fact, Warren has no one to blame but herself for her false claim to be Cherokee. Read Elizabeth Warren Wiki, and these posts responding to the claims in her book:

Warren will be launching a nationwide book tour. Someone who wants to meet Warren is Twila Barnes.

Barnes is the Cherokee Genealogist whose groundbreaking genealogical research exposed the falsehood to Warren’s claims. Barnes and her team of Cherokee genealogists traced Warren’s family lines back to the early 1800s and documented that Warren’s family not only was not Cherokee or other Native American, but also that they never lived as such:

Barnes also debunked much of the “family lore” used by Warren to justify claiming Native American status. One of my favorites was Barnes’ discovery that Warren’s maternal great grandfather, on the supposedly Cherokee bloodline, was featured in the local newspaper in 1906 as being white and having shot an Indian. And also Barnes’ discovery that Warren’s parents’ wedding was joyously announced in the local newspaper, which would contradict Warren’s claim that her parents had to elope because her father’s family would not tolerate their son marrying an Indian.

Warren's original claims for minority status would have been ludicrous even if her ancestral claims had any truth to them; after so many generations of out breeding and living in the "White" world, any claim to disadvantage based on so little was simply abuse of the system.  The fact is, even those "family legends" don't hold up to scrutiny.

Massachusetts is welcome to her.  They've rarely shown a lick of sense in whom they elect; I expect little more from them in the future.  However, if she attempts to move further onto the national stage, she needs to be ridiculed and heckled off.  Women and minorities with legitimate claims of disadvantage should be be leading the charge. This, of course, is an issue because Fauxcohontas is positioning herself as the fall back woman candidate for the democrats should Hillary fail to make the run, by falling ill, or even, however improbably, growing a conscience.
Posted by Fritz at 5:37 PM