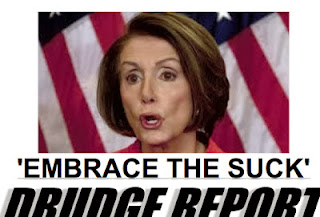 "Embrace the suck" is the phrase used by Speaker of the House Minority Leader Nancy Pelosi to help calm far-left liberal outrage at the budget deal reached between Reps. Paul Ryan and Patty Murry, passed in the house by a strong bipartisan majority of both parties, and criticized roundly by the outer flanks in both parties.

But the phrase could also find some utility to liberals who find their own health care plans turned topsy turvy by Obamacare, like these professional and artsy-fartsy New York liberal types who thought that Obamacare was only for the little people:


"Many in New York’s professional and cultural elite have long supported President Obama’s health care plan." "But now, to their surprise, thousands of writers, opera singers, music teachers, photographers, doctors, lawyers and others are learning that their health insurance plans are being canceled and they may have to pay more to get comparable coverage, if they can find it."

It is an uncomfortable position for many members of the creative classes to be in. “We are the Obama people,” said Camille Sweeney, a New York writer and member of the Authors Guild. Her insurance is being canceled, and she is dismayed that neither her pediatrician nor her general practitioner appears to be on the exchange plans. What to do has become a hot topic on Facebook and at dinner parties frequented by her fellow writers and artists.

Embrace the suck. You wanted it, you fought for it, you deserve it.

Moe Lane reminds us that we are not the subject of an absolute monarchy, and that the many changes that the administration has made on the fly have no basis in the law that they supervised the construction of:


Glenn Reynolds has a question about this:


The Obama administration on Thursday pushed back the deadline for consumers to make their first payment for coverage under the healthcare law.

Rather than a deadline of Dec. 23, insurers will be required to accept premium payments through Dec. 31 for people who are seeking coverage that starts on Jan. 1.

In addition to the one-week extension for premium payments, the administration on Thursday formalized its announcement that consumers have until Dec. 23, instead of Dec. 15, to sign-up for healthcare coverage that goes into affect Jan. 1.

To wit: “Where, exactly, do they get the authority for all these exemptions, waivers, and extensions?” To the best of my knowledge, they don’t have this authority. Which leads me to my question: What makes the government officials implementing this policy think that they are immune from prosecution for any laws that they break while following the administration’s orders? – And don’t say that they don’t have to worry about that. After February 2017, Barack Obama won’t be able to fix a parking ticket.

Megan Mcardle looks at the recent "requests" that Kathleen Sebelius made to the dreaded insurance companies: Obamacare's Never-Ending Fix-a-Thon  - The Calvinball phase is past, now they're just begging the insurance companies to bail them out.


The Department of Health and Human Services held a conference call for journalists this afternoon with Kathleen Sebelius and other members of the Obamacare team in which they announced yet another round of fixes. Most of them are aimed at folks who lost their insurance due to the new Patient Protection and Affordable Care Act mandates and who, for one reason or another, have not yet completed a purchase on the federal health-insurance exchange. Here’s what the administration is planning:

Insurers will be required to accept payment for policies beginning Jan. 1 as late as Dec. 31, and they will be “encouraged” to accept payment after that. In response to a question, HHS says that at least one insurer, Aetna Inc., has agreed to take payments as late as Jan. 8.
. . .
This tells us a few things, I think. The first is that the administration is deeply worried about people who had insurance they liked who are now going into January with either no insurance or with insurance that doesn’t cover doctors and treatments they’re receiving.

The second thing it tells you is that the administration has reached the limits of its November strategy of using last-minute rule-making to implement on-the-fly changes to the law. . . by making the request in public, the administration has given itself room to blame insurers when people lose access to doctors, drugs or insurance. Now they can say, “Well, we asked them not to do that.”

Day by day, the administration is putting more of the onus on insurers to make this market work -- voluntarily, out of the goodness of their hearts or at least out of mutual self-interest. . . But, of course, it hands an awful lot of power to insurers that just a few months ago the administration seemed committed to taking away. It probably wouldn’t be doing that if it weren’t worried about how things are going.

In 2010, the promise was to insure 47 million Americans who didn’t have insurance, and to save you those $2,500, and let you keep the plan you have and the doctor you like.

In 2011, the promise was maybe more like 30 millions Americans would get insured. I don’t remember any more talk about an actual dollar figure on your savings, but you could still for sure keep your doctor and your plan.

In 2013, the promises, shifting though they were, all got broken. Premiums might be down, assuming you can get subsidized, but your copays and deductibles are all higher. As one smart commenter here put it a while back, the ObamaCare-approved plans are essentially catastrophic coverage at Cadillac plan prices. Instead of promising coverage to maybe 23 million Americans, the hope — and so far it is just a hope — is to get about seven million signed up by the end of next March. The official figure is 365,000 or so, but the real figure is significantly lower. How much lower is anyone’s guess, because guesswork is all this tight-lipped administration has left us. 800,000 or so have been added to the Medicaid rolls, which I suppose counts as coverage, if not actual insurance.

Remember how Obamacare was supposed to increase the number of people having healthcare coverage?  Not so fast. . .


It's not clear just how many Americans will experience a gap in insurance coverage because of Obamacare. On Thursday afternoon's HHS press call, one reporter asked: "Is it possible at this point that more people may lose insurance in January than gain it? Is that what's motivating these policy announcements today?" HHS spokeswoman Julie Bataille went on for nearly two hundred words without answering the question:


"I would remind you that we are, you know, two and a half months into a long six months open enrollment period and we will continue to maintain an aggressive period of outreach and education blah, blah, blah....

When the reporter repeated his question, Bataille again refused to answer: "We're confident that millions of Americans will have access to more affordable health coverage than they ever have before."

Access is not healthcare or even health insurance.  All people in the United States had "access" to health coverage prior to Obamacare.  They had to pay for it, however, so many people chose not to.

Insurers privately tell Bob Laszewski that they think more people will have lost insurance by January 1 than the number who have signed up for Obamacare by January 1.
. . ."My guess is that we'll have somewhere around a million and a half people signed up for Obamacare on January 1 in the states and in helathcare.gov," he says. The big question then, he adds, is "why have we gone through this whole dislocation of the American health insurance system if only a million and a half to two million buy health insurance?"

The hardest job in the United States today?  To be a democratic congress man or one their media hacks defending Obamacare:


Want to know the toughest job in America? Two sad sacks — one a congressman, the other a journalist — demonstrate that it's probably defending Obamacare.

Rep. Gerry Connolly, D-Va., tried during Thursday's House Committee on Oversight and Government Reform hearing to refute testimony from multiple witnesses about the many ways Obamacare is causing a shortage of health care providers, especially doctors. As the Washington Examiner's Susan Crabtree reported on PennAve, Connolly said Democrats on the committee "could have chosen our [own group of doctors], and we could ask you to wear the white coat and could get a very different story."

At that point, committee chairman Rep. Darrell Issa, R-Calif., displayed "a powerpoint slide of Connolly's official website from 2010 in which he promised that the Affordable Care Act would bring down premiums for families and small businesses." Similar scenes will happen repeatedly between now and next November.

Then there's Los Angeles Times business columnist Michael Hiltzik. Name sound familiar? It should, as a few years back, Hiltzik's editors took away his column. Why? In 2006, Hiltzik was caught using fake names to post comments praising his own work and attacking his critics.

Hiltzik got his column back in 2008 and more recently has turned it into a reliable and aggressive agit-prop platform for Obamacare.

Yesterday, he claimed -- falsely -- that Examiner senior investigative reporter Richard Pollock "revised his story" about California doctors refusing to participate in Obamacare's Covered California exchange. The "revision," according to Hiltzik, was from saying doctors are "boycotting" Obamacare to saying their refusal to participate was a "spontaneous" movement.

But Pollock never characterized the doctors' actions as a boycott. That was how independent insurance agents he quoted described those actions. They, not Pollock, estimated that 70 percent of them were refusing to join Covered California.