John Sexton at Haut Hair, Portland on the verge of the most violent year in modern history

Portland hasn’t quite crossed that line this year but it seems inevitable. So far this year, 68 people have been killed compared to a high-water mark of 70 who were killed back in 1987. Of course the population of Portland is almost double what it was in 1987. Still, the city had just 36 homicides in all of 2019, so a sudden surge to what will likely be double that in 2021 is worrisome.

Fatal shootings in almost all sections of the city have followed fistfights, social media disputes, and drug deals gone bad. People sitting in cars, relaxing after work with friends in a bar, attending house parties or walking in a park have been shot dead.

Forensic analysis of spent bullet casings from crime scenes reveals connections between many of the shootings, pointing to gangs and retaliation as frequent drivers of the gun violence, investigators say…

The comparison to last year is especially worrisome because the number of murders had already spiked 83% last year according to FBI data. Another conspicuous aspect of the murder rate is that it is disproportionally impacting black residents. Portland is one of the whitest cities in the US (nearly 75%). The black population only makes up about 6% of the city. And yet, the breakdown of homicide victims this year looks like this: 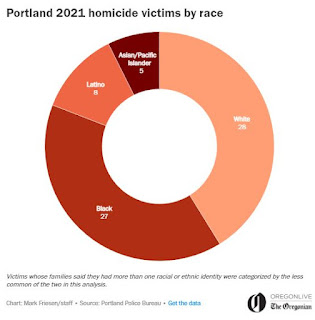 But, but, but, Black Lives Matter!

I wonder what could be to blame. Defunding the police? Encouraging riots?

Linked at The Daley Gator in Links for Saturday evening, and Sunday,