Election 2020: Shenanigans in Georgia and Mollie has a Book

From the Wombats In The Mailbox: 10.12.21 (Evening Edition), at Da Fed, William Doyle details how The 2020 Election Wasn’t Stolen – It Was Bought By Mark Zuckerberg. News Max says Zuckerberg Money Used in Violation of Federal Election Law. Probably, but nobody goes to jail for those except Dinesh DeSouza. At Star News, ‘Zuckerberg Should Be in Jail:’ Molly Hemingway’s New Book Hits Back at Silicon Valley over 2020 Election and the unsinkable Mollie herself at NYPo, Exclusive book excerpt: How Facebook and Twitter rigged the game in 2020. Jordan Davidson at De Fed, DeSantis Celebrates Banning Zuckerberg’s Election Meddling As A Win For Safe, Secure Voting.

Ace, Mollie Hemigway's New Book Rigged Details How Clinton Crony Marc Elias Not Only Paid for the Russiagate Hoax Dossier, But Then Worked to Change Election Rules In Time for 2020, From Natalia Mittlestadt at JTN, Mollie Hemingway's 'Rigged': How Dems have outmaneuvered the GOP in elections for years.

Interviews with more than a dozen witnesses, officials and lawyers who have interacted with retired Justice Mike Gableman and his staff suggest a strong focus on the role election bureaucracies played in changing the rules — without legislative consent — for how ballots were sent out, filled out, collected and counted.

Dan Gelernter at Am Great warns of the impending Virginia Governor's election, Your Vote Won’t Count, "There is no point in hoping the next election will be magically less fraudulent than the last one. Hope gives you an excuse not to act." Yahoo! whines that a Republican ad in Virginia displays nationalization of state politics. They would never complain about a Democrat ad. At Unherd, How the Republicans can steal Virginia. Steal should be in quotes; he's merely complaining about conservatives being too harsh on McAuliffe. 'Bonchie' at Red State reports Terrified Virginia Democrats Seek to Change Election Laws After Voting Has Already Started, using the old WuFlu gambit of waiving the witness signature requirement on absentee ballots. Atop Da Hill, Jill Biden and Barack Obama to campaign for McAuliffe. Via the Wombat's In The Mailbox: 10.12.21 (Afternoon Edition), at Twitchy, Terry McAuliffe Bringing In Stacey Abrams, Obama & Jill Biden To Help His Stumbling, Crumbling Campaign For Va. Gov

Also on Da Hill, House Budget Chair John Yarmuth (D-KY) to retire from Congress. He was likely to be redistricted out of office anyway. AllahPundit at Haut Hair wants to Abandon ship: Dem chair of House Budget Committee not running for reelection. "Ah, a tradition unlike any other — the drumbeat of retirement announcements among the governing party ahead of an expected bloodletting in the midterms."

Switching topics to Jan. 6, via the Wombats In The Mailbox: 10.12.21 (Evening Edition), the redoubtable Julie Kelly, at Am Great claims Our Representatives, Not J6 Protesters, Defile the ‘Sacred’ U.S. Capitol, "The real heretics continue to rule while Robert Reeder is off to jail." Byron York at the Washington Examiner examines 'Armed insurrection': What weapons did the Capitol rioters carry? No guns found at the Capitol, but some arrested later on gun charges. Rioters accused of having weapons in the Capitol were mostly carrying sticks, not AR15s. JD Davidson at Da Fed says The Purpose Of The Jan. 6 Select Committee Is To Suppress Free Speech. That, but I think it's also to get an electoral advantage in 2022, 2024. Via the Wombat's In The Mailbox: 10.12.21 (Afternoon Edition), at Da Lid, Capitol Police Whistleblower Claims Leadership Botched Jan. 6th And Lied to Congress About It, "Will This Hurt Pelosi's Plan For A Third Annual Trump Impeachment?" Jazz Shaw at Haut Hair warns Biden's self-defeating decision on executive privilege may come back to haunt him. It may come back to bite Democrats, but Biden himself will be too far gone in dementia to notice. Matt Lewis at De Beast wants you to know how How Tom Cotton Went From ‘Send in the Troops’ to Stopping Trump 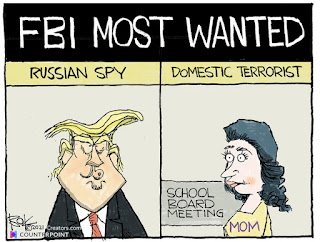 Switching again to Merrick Garland and the war on the P part of the PTA, also from the Wombat's In The Mailbox: 10.12.21 (Afternoon Edition), The Political Hat says Attorney General Garland Mobilizes To Protect Wokeness and from In The Mailbox: 10.12.21 (Evening Edition), Legal Insurrection brings Providence RI Schools Move To Terminate CRT Whistleblower Teacher, Mass. Teacher Fired For Opposing CRT/LGBTQWTFBBQ Agenda In Schools, and Loudoun County Dad Accuses School Board Of Covering Up His Daughter’s Rape By Trans Student. At NYPo, Amanda Devine divines that AG Merrick Garland is at war with American families. Don Feder at Front Page, I, Domestic Terrorist, "Merrick and Joe are building the Reich back better."

On the outrage in Loudoun, at Fox, Loudoun County parents demand superintendent resign over alleged sexual assaults in schools. while Sundance at CTH, Loudoun County, Virginia, School Board Covered Up Student Rape and Had Father of Victim Arrested to Keep Him Quiet, National School Board Association Then Labeled the Father a Domestic Terrorist. Capt. Ed at Haut Hair calls it a Horror: Father accuses Loudoun school board of covering up sexual assault. Ace, Parent: A "Boy In a Skirt" Sexually Assaulted My Daughter In the Bathroom -- and Then the Loudoun County School Board Covered It Up "Via Twitchy, the thing that we've all warned would happen did happen, and then the people who've spent years denying it could ever happen covered it up." Virginia Kruter at Da Caller, Dana Loesch Torches School Board: ‘They Would Rather Sacrifice Girls And Their Innocence At The Altar Of Political Correctness’. They've already sacrificed the boys, at least the white ones. Gail Heriot at Insty tries to explain JUSTICE GORSUCH AND THE TRANSGENDER BATHROOM ISSUE: The transgender bathroom issue has made it into the (conservative) news again—this time in a case involving an alleged sexual assault in at a Loudoun County school.

At LI, Massachusetts Teacher Fired Over Opposition To CRT, LGBTQ Agenda In Schools and Providence Schools Move To Terminate Critical Race Whistleblower Teacher Ramona Bessinger. At NSJ Online, Orange County (NC) Public Schools board chair ejects parents, speakers from meeting, "The reason? Apparently speaking about concerns and topics that were not on the meeting agenda."

“The National director circumnavigated the governing process and overstepped their authority and should be held accountable,” said Brevard Public Schools Board Member Matt Susin, who is also a member of the FSBA board of directors and chairman of the FSBA Advocacy Committee.

“We value parental involvement, we value parental input, and we value citizen engagement. We cannot squelch dissent which is the bedrock of our democracy. If civil, civic discourse strays into improper behavior we have and will continue to look to our local law enforcement for assistance.”