Many years ago, a few years after we had this house built, we started a small orchard in the front yard, planting a pie cherry (Montmorency, I think), and a Granny Smith apple tree. The pie cherry suffered from rot from the start, as well as birds, but we managed one decent crop of cherries, IIRC, before it gave up the battle. The apple tree muddled along forever in the partial shade from a large holly tree, flowering nicely in spring, setting a large crop of apples, dropping most of them before they matured, and the squirrels claiming almost all the rest. Over the years, we must have collected a total of about 5 edible apples. Every year I pruned it, swearing that if it didn't produced this year, I'd cut it down (like we did with one in the back yard). Of course, we never pre-treated it for any diseases.

This year, I just let the pruning go, and maybe as a result, we had what appeared to be a bumper crop which attained ripeness.  Yesterday, in advance of a storm, I went out and harvested the remaining apples on the tree, using a rake to pick the apples, and trying to catch them as they fell. I was usually successful, but next year, if we have a good crop, I should get an apple picker. Corwin and Gabi assisted by throwing the badly rotten apples (of which there were quite a few) into the woods. Apples that looked like we could salvage at least half were kept for immediate use. After those were peeled cored and set aside for baking (yielding a gallon of cut apple pieces), this was what was left for storage. 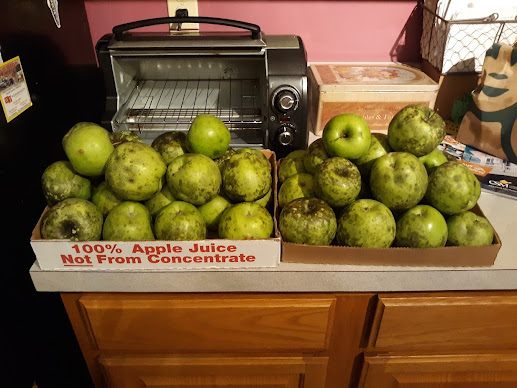 I know, they look pretty nasty, covered with mildew, and some even more resistant apple-cedar rust, but with a little scrubbing, that comes off, leaving just a few spots. As Joni said sang, give me spots on my apples, but leave me the birds and the bees, please. Georgia took some of the cut apples went to make an apple crisp: 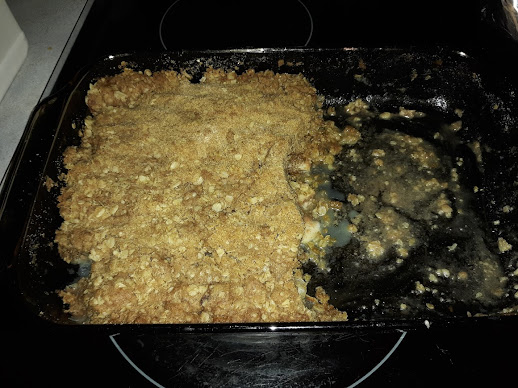