The Youngkin v. McAuliffe race for Virginia Gubernator is winding down to the inevitable let down (for someone) on Tuesday. Two new polls show GOP's Glenn Youngkin pulling ahead of Democrat Terry McAuliffe (JTN) "This is the first time since the race began that has Youngkin outside the margin of error," Ace, Fox News Poll Puts Youngkin Up Eight Points Over Clinton Bagman Terry McAulliffe "Plus: NJ Governor's Race Tightens as Murphy's Staffers Admit He Plans to Re-Impose Draconian Lockdowns After The Election. Via the Wombat's In The Mailbox: 10.29.21 (Evening Edition), The Geller Reports, Poll: Republican Glenn Youngkin Ahead of Democrat Terry McAuliffe by 8 Points in Virginia Governor’s Race. AJ Kaufman, PJ Media, As Pence Visits Battleground Virginia, Youngkin Widens Lead. And even the WaPoo admits, via Capt. Ed at Haut Hair, that its a  Virtual dead heat in McAuliffe-Youngkin race; UPDATE: 42-point swing on education?

We got a sneak peek at a poll that's going to be released today... and yes it also shows Youngkin with a lead.

But the most shocking thing in it is the internals specifically with respect to the black vote. Dems are 10 points (at least) below where they need to be with blacks. 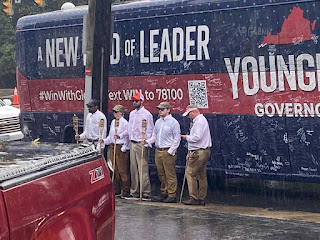 Insty HOW DESPERATE IS THE MCAULIFFE CAMPAIGN?


“This desperate: earlier today a group of Democrats lined up in front of a Glenn Youngkin bus holding tikis, as part of an effort to tie Youngkin to Donald Trump/Charlottesville/white supremacy. Terry McAuliffe’s Communications Director said the men’s presence was ‘disgusting and disqualifying.’ But no one was fooled, and she later deleted the tweet. . . . The escapade dominated Twitter today. It quickly developed that one of the ‘white supremacists’ was the Financial Director of the Young Virginia Democrats. . . . The McAuliffe campaign is now backpedaling furiously, denying any responsibility. But this incident shows that McAuliffe is desperate. His internal polling must be awful, consistent with publicly-reported polls that show Youngkin pulling away. In his desperation, McAuliffe apparently has resorted to one of the lowest, and least successful, smears on record.”

Even so, there was some skepticism that the Lincoln Project (a vehicle of ex-Republican virulent anti-Trumpers) would carry this out without some direction from the McAuliffe campaign. Ace, Quick Hits: The Repulsive, Vile Lincoln Project Confesses Guilt for the Racist Terror Hoax Today But... Are They Lying? Althouse, The Lincoln Project inserts itself into the Virginia gubernatorial race by sending 5 demonstrators with tiki torches to a Glenn Youngkin rally.

1. Here's how the Washington Post puts it: "A group of people carrying tiki torches outside Virginia Republican gubernatorial candidate Glenn Youngkin’s tour bus in Charlottesville on Friday, which caused a stir on social media and led both political parties to blame the other for the stunt, turned out to be organized by the Lincoln Project, an anti-Trump Republican group."
. . .
7. Klein raises a very basic question that had occurred to me: Is the Lincoln project telling the truth now? The stunt itself was deceptive, so how do we know this isn't a new form of deception — "taking the heat off of somebody else given the stunt epically backfired"? I would note that there are 5 human beings who are easily identifiable, the demonstrators. Why did they do it? How much were they paid? What were they told? Is anyone talking to them?

Racism in Virginia is such a huge problem and so endemic that Virginia Democrats had to hire a black guy to pretend to be a white supremacist to bring awareness to the problem so Terry McAuliffe’s could replace the current Democrat who also dressed up like a KKK member.

At NYPo, Republican Youngkin vows Virginia gov vote ‘isn’t gonna be close’ but will it be beyond the margin of fraud? Mediatite whines Here We Go Again: Mark Levin Insists Terry McAuliffe is Plotting to ‘Steal the Election’. If they think they can get away with it. The Virginia Star has  ‘Will Your Daughter be Next?’ Brutal Ad Targets McAuliffe After Alleged Loudoun County Rape Coverup. From the Wombat's In The Mailbox: 10.29.21 (Evening Edition), LI,  Thank Parents If Youngkin Defeats McAuliffe In Virginia and Weasel Zippers, Va. Pushes Critical Race Theory Despite McAuliffe’s Repeated Denials. FEE, VA Gov Candidate Terry McAuliffe Gets Caught Lying About Child COVID Hospitalizations, "McAuliffe is cynically calculating that he can scare voters into giving him power." Breitbart, Terry McAuliffe’s Daughter Gives the Middle Finger to Glenn Youngkin Signs. Sure, kids are like that. Via Haut Hair the NYT whines that Glenn Youngkin was a traditional Republican. Then he became a culture warrior.
And in Loudoun County, current fire fight in the culture war, from the Wombat's In The Mailbox: 10.29.21 (Evening Edition), Power Line, Ground Zero In Loudoun County, Da Feds Elle Reynolds,  How These Loudoun County Parents Reacted To Proof The School Board Lied To Them, and the Victory Girls: Consent No Longer Important To NYT. At Da Signal, ‘There Is No Rational Debate’: Loudoun County School Board Chair Trashes Parents, while Althouse fall for the liberal view "But this week, during a juvenile court hearing, a fuller picture of Smith’s daughter’s ordeal emerged. She suffered something atrocious." "It had nothing at all to do, however, with trans bathroom policies. Instead, like many women and girls, she was a victim of relationship violence. " And her commenters take her to task. Meanwhile in nearby Fairfax County, via the Wombat's' In The Mailbox: 10.29.21 (Afternoon Edition), a Virginia Mother Says Federal Agents Infiltrated School Board Meeting (Eric Lendrum at Da Fed). She might be mistaken, but she might be right.
From the Wombat's' In The Mailbox: 10.29.21 (Afternoon Edition), Louder With Crowder and Don Surber both note how School Board Member Takes Children on Field Trip Gay Bar, and Eugene Volokh comments on the case of "Speaker Removed from Orange County [Fla.] School Board Meeting for Reading from a Book Found at School Library" "But note that the school board chair opined that the book shouldn't be in the library, either."

At Creators, Michael Barone pens Health and Education Elites Forced To Confess Error. Robert Busik at Da Fed thinks The School Board ‘Domestic Terrorism’ Dumpster Fire Proves Parents Are Winning Ground and Chris Stigall warns Don’t Screw With American Parents. Via the Wombat's' In The Mailbox: 10.29.21 (Afternoon Edition) via the Wombat's' In The Mailbox: 10.29.21 (Afternoon Edition), Hinderacker at Power Line features Hawley Rips Merrick Garland.
Have you heard? Newsweek whines Tucker Carlson to Launch Jan. 6 Riot Documentary—Suggests Was 'False Flag', from her soon to be lost perch atop Da Hill, Liz Cheney calls out Fox over new Tucker Carlson promo, sundance at CTH, Soon to Lose Her Congressional Seat, Liz Cheney is Very Worried About January 6th Truth Surfacing in Tucker Carlson Documentary, and from Town Hall's Julio Rosas, Tucker Carlson Hits Back at Liz Cheney After Saying Upcoming January 6 Documentary Is Full of 'Lies' and from Forbes, Geraldo Rivera Slams Tucker Carlson On Jan. 6 Documentary Meant To ‘Provoke’ Rather Than ‘Illuminate’, but who cares what Geraldo thinks?
From Politico, ‘Almost schizophrenic’: Judge rips DOJ approach to Jan. 6 prosecutions "Chief District Court Judge Beryl Howell criticized “petty offense” plea deals for defendants who she said tarnished America’s reputation in the world." She needs to be removed from the bench for bias. And in the real insurrect, justice delayed as PM reports Portland Antifa member indicted over 2019 Andy Ngo attack.
At NewsMax, Vocal GOP Trump Critic Adam Kinzinger Retiring, at Twitchy, GOP Rep. Adam Kinzinger’s retirement from Congress isn’t nearly as stunning and brave as he wants people to think and from sundance, President Trump Responds to Adam Kinzinger Announcement He Will Not Run for Reelection: Two Down, Eight to Go.
From the Wombat's' In The Mailbox: 10.29.21 (Afternoon Edition),At Da Tech Guy, Where I disagree with Donald Trump’s Letter to the WSJ

I am increasingly of the opinion that our friends in the media and the left do in fact understand that the election was rigged and stolen but because they approve of the steal do not acknowledge it.

I think that eventually we will reach the point where the media/left openly boasts of said steal and declares it was in the best interest of the nation.

John Solomon at JTN, has the Narrative of a perfect 2020 election eroding as Wisconsin becomes investigative ground zero, "Evidence grows of election mismanagement, illegal acts and some fraud in several states." Nice Deb at Am Great, Wisconsin Sheriff’s Office Presents Evidence Showing Election Board Committed Felony Election Fraud in 2020 and Kylee Zempel at Da Fed, Wisconsin Elections Commission ‘Shattered’ Laws By Telling Nursing Home Staffers To Illegally Cast Ballots For Residents, all in the name of Covid, of course. At the Virginia Star, an Exclusive: Shock Report Finds ‘Massive Discrepancy’ with Absentee Ballot Records in Virginia, and records destroyed which could prove the votes were legitimate. I wonder why? Then, to keep the possibility of fraud in Michigan alive, Whitmer vetoes GOP-backed voter ID measures.

At Da Caller, New Swing State Poll Does Not Bode Well For Joe Biden. Good, but too early to start counting chickens.