But a parallel survey in Maryland waters showed below-average numbers.

The surveys look at striped bass that hatched in the spring and that will be large enough to catch, legally, in three to four years.

If they allow it, by then (see below).

Preliminary results of the Virginia survey showed an average of 6.3 fish for each haul of a seine net in the James, York and Rappahannock rivers. These young striped bass usually measure between 1.5 and 4 inches. That’s the 9th consecutive year of average or above average results, VIMS said.

Last year’s average was 13.89 fish. The survey has returned results above the long term average of 7.77 fish for five of the past 10 years, with one below average result in 2012. The 2021 return is considered to be average because it is within a range that statistical theory considers to be essentially equivalent because of the challenges of estimating wildlife populations. 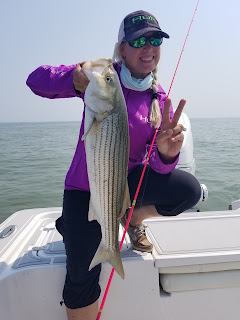 At least Virginia makes a pretense of acknowledging the variability inherent in the survey. Maryland doesn't bother.

Striped bass numbers in Chesapeake Bay rebounded from historic lows in the late 1970s and early 1980s after fishing bans were enacted in Delaware, Maryland, and Virginia in the mid- to late-1980s.

But in 2019, scientists found that striped bass, coastwide, were overfished, and that more were caught than the population could withstand over the long term. 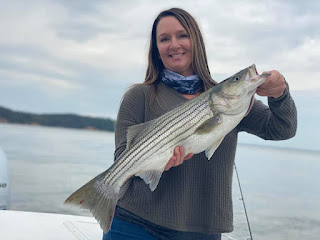 I can't really say how much the Virginia recruitment helps boost the striper population in MD. Certainly adult stripers are very migratory, with adults from MD swimming past Virginia on their way to the ocean to grow and back to spawn. But do stripers recruited in VA join the big masses of fish that populate the middle and upper Bay in summer? I just don't know, and I suspect that hasn't really been examined carefully. We might find out the hard way that they don't.

The Maryland Department of Natural Resources’ survey showed below average results, as it had in 2013, 2016, 2019 and 2020. VIMS said the reasons for such differences can be hard to determine.

With a tip of the hat to the old James Bond saw that "once is happenstance, twice is coincidence", we must start to ask what is Virginia doing right that Maryland might not be.

I heard a rumor from Pete the other day that either AMFSC or MDDNR was preparing a proposal for a 5 year moratorium on Striped Bass fishing in MD.