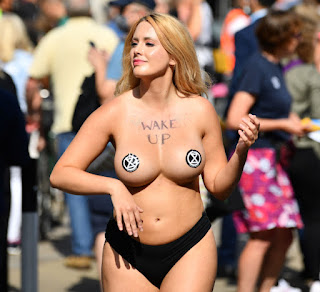 At the UK Mirror, Woman goes 'topless' at Extinction Rebellion protest to 'draw attention' to crisis

An Extinction Rebellion protester went topless in the hope showing her breasts would help "draw attention" to the climate crisis, she has revealed.

Laura Amherst, 31, was photographed without a top on Wednesday as the environmental campaign group descended on London's Oxford Circus for the third day of their two-week "Impossible Rebellion". 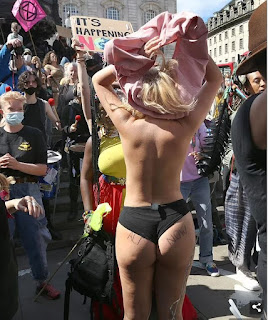 Instead of clothes, Laura dressed herself with a message scrawled across her chest, which read: "WAKE UP."

On her bottom someone had written: "ACT NOW".

Laura, a vegan from Brighton, said: "I did it to draw attention to the climate crisis facing the planet."