Quite a collection compared to yesterday. Is the Taliban's shock and awe wearing off already? Some non-news from AP via Wahoo!, Report shows big spike in mail ballots during 2020 election.

From Georgia, via the Wombat's In The Mailbox: 08.16.21, The Geller Report informs us that the Fulton County Election Registration Chief Resigns. The guy who claimed a leaky toilet was a water main break so he could continue to count ballots in peace. From Behind the Black, Georgian election official resigns who announced fake water main break. Not the way I would have worded it, but he's an author.

In at transparent admission that their voting machines can be hacked, and even they wouldn't be able to figure it out, Maricopa County Says Voting Machines Subpoenaed For 2020 Election Audit Won’t Be Used In Future (the Conservative Brief). At CTH, sundance has a 3 part Interview With Arizona Senate President Karen Fann Outlining Suspicious Activity by Maricopa County Election Board.

A quick reminder to everyone who thought it was OK to let the last election be stolen.

Even if we are very lucky and the end result of this Afghanistan debacle is the best care scenario which is :
Even if a miracle occurs and none of these obvious consequences take place there will still be tens of thousands of people in Afghanistan slaughtered by the Taliban with millions more repressed as they impose a full Islamic state on the region.

WJ reminds us  City Councilman, 5 Others Charged with Election Rigging in Race Decided by Just 1 Vote. But there's no such thing as election fraud. Bruce Bawer at Am Great, Is This Anything?

The election of 2020 may well have been the single most remarkable example of audacious, large-scale fraud in human history. But state officials and judges closed off inquiry into the fact. The legacy media erected a cordon sanitaire around the whole thing. To inquire, to investigate, even to wonder, was tantamount to treason. What had happened on November 3? The answer was wreathed in layers and layers of lies. And a pathetic, quixotic effort by a handful of Trump supporters to stand up to those lies on January 6 in the only way they could think to do ended up being described as an attempt at an insurrection.

In case anyone is wondering how what is happening in Afghanistan is possible… in May of this year, @SecDef Lloyd Austin identified climate change as the #1 issue facing the military. #2 was countering violent extremists in the military. #3 was team work with allies and agencies. 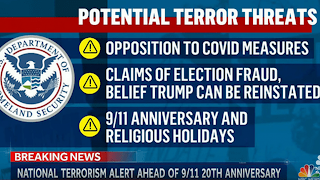 Gen. Flynn at Front Page, Since New DHS Alert, You're a Potential Terrorist if You Oppose White House Lies. Mary Chastain at LI, Colbert Says What the Left Thinks: Trump Supporters are Just Like the Taliban, "Glenn Greenwald: “They do believe the War on Terror should not end but be transferred to domestic politics, with Trump voters treated like Al Qaeda.”"
At NewsThud, Defense Attorney: FBI agent told Whitmer kidnap plotter to cover up FBI’s ‘unlawful’ involvement. Michele Malkin, Feds' Bill for No-Fly Secrets: $4,536


I sent a simple request in April to my government for public data that taxpayers have the right to see. Through the federal Freedom of Information Act, I asked the Transportation Security Administration (as well as the Federal Bureau of Investigation) for the following information:

No. 2: All information, documents, records and communications within the TSA and/or between the TSA and the FBI regarding attendees of the Jan. 6, 2021, Capitol rally and their inclusion on the no-fly list, selectee list and extended selectee list from Jan. 6, 2021, through the present. (I requested copies of all information, records, emails, phone logs/transcripts, letters, notes, memoranda and all electronic or nonelectronic communications/records/information related to aforementioned events and aforementioned parties.)

You’ll be interested to know, my fellow American citizens and taxpayers, that the price of unlocking the TSA/FBI’s no-fly secrets is precisely $4,536 ($28/hour). Michael Tobias, government information specialist at Department of Homeland Security/Transportation Security Administration/Freedom of Information Act Branch, informed me that “it would take a combined search time of 162 hours” to fulfill my request and that half of the estimated cost — $2,268 of the $4,536 — would be due up front as an advance payment. “Thank you and have a great day!” Tobias ended his missive to me.

So much for “freedom” of information. LOL.

From the Wombat's In The Mailbox: 08.17.21, American Greatness Julie Kelly calls  1/6  A Distraction From Afghanistan & Other Crises. NYPo, Twitter says Taliban can stay on platform if they obey rules. "Unlike former President Donald Trump, the faces and voices of the reconstituted Taliban regime in Afghanistan can apparently tweet to their hearts’ content." Mary Chastain at LI, Twitter Offers Word Salad to Explain Why It Won’t Ban Taliban Spokesman. "Shorter Twitter: Whatever." We know whose side they're on. The Bee, Trump Sneaks Back On Twitter By Disguising Self As Taliban Spokesperson. 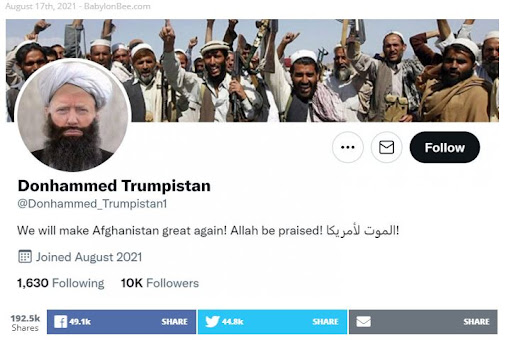 On the other hand, CNET reports Facebook reportedly shuts down Taliban accounts on WhatsApp
A Taliban helpline for people to report looting and violence was blocked, reports the Financial Times. Via the Wombat's In The Mailbox: 08.17.21, From EBL, Taliban Calls Out Facebook for Free Speech Hypocrisy 😬🤦🏻‍♀️