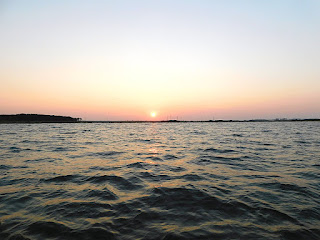 Mike had his son and grandson back out of a planned fishing trip with Walleye Pete, so I got a call to see if I wanted to fill in. I did.
Our first stop, at sunrise, was "Mike's Rocks" on Hoopers Island, a submarine rock structure the Mike once ruin a lower unit on. He knew they were there, but he forgot.
No fish there. 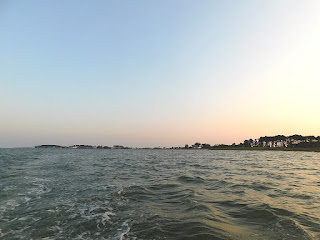 Our next stop was "Magic Cove." No magic happened here either. It's a process; find where the water is clearer and where the fish are hanging out. 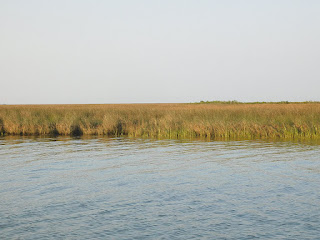 Our next stops were several sites on the north end of Bloodsworth Island. A beautiful place that the Navy uses to bomb, but without fish today 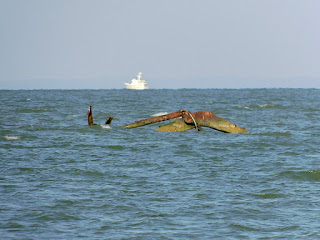 Our first fish came near a familiar landmark; the remains of an old backhoe used to try to save an old house on Holland Island many years ago. That part of the island is gone, but the backhoe, and the foundations of the house provide good fishing structure. We got our limit of Striped Bass here. 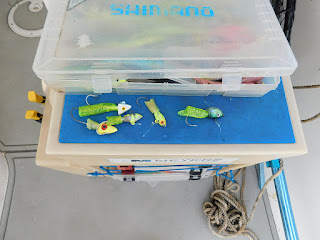 From here we spotted a bunch of birds working over some fish in shallow water. It turned out to be a wolf pack of blue fish. We sacrificed some rubber to them while catching enough for one dinner (tonight) and a full rack in the smoker. 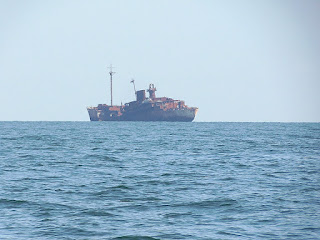 Our next area of interest was out in the Middle Grounds, near the old Target Ship that looms over the area. Mike, a former Marine pilot, has contributed to the holes in its side.
A few days ago Pete had an amazing day here, catching Cobia, large (but not giant) Redfish, and some specks. 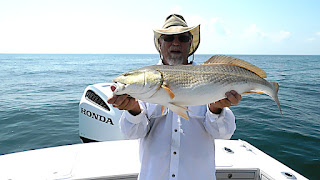 It took a while (and it was really hot out), but eventually we found them. First, Mike and I caught each caught a couple of large reds. Mine was 32 inches, Mike threw his back without measuring it, it was clearly larger than the maximum length for keeping 29 inches. 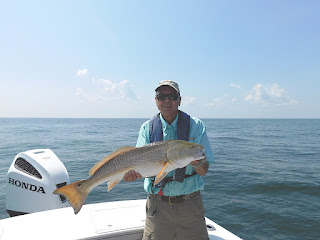 So he held mine up instead. 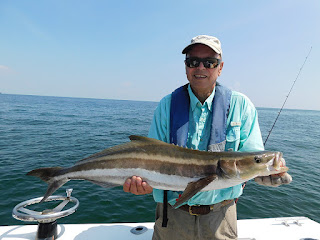 Then the Cobia struck. First Pete wrangled one to the boat and broke it off. Then Mike (pictured) hooked one too, and landed it (Pete netted it). The minimum size for Cobia is 40 inches, this was 39. I remain Cobialess, alas. 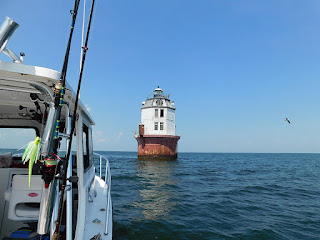 A quick stop at Point No Point Light, where Mike caught one more small Striper.