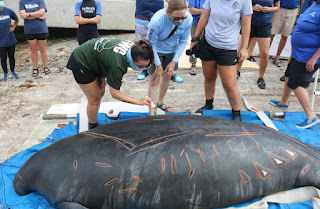 A record number of manatees has perished in Florida this year in what experts are calling an unprecedented die-off. Marine scientists say most of the 890 deaths, as tabulated through July 30, are linked to a massive decline in seagrass on the state’s East Coast that has robbed the gentle mammals of their primary food source.

But in this case, rescuers soon realized they had just saved an icon. A decade after his last confirmed sighting anywhere, Chessie the manatee — famous for his northerly treks to the Chesapeake Bay — was still alive.

The distinctive scars on his back betrayed his identity as the manatee that stunned the scientific world in 1994 with his first foray into the Chesapeake, for which he was named. At the time, he was the first documented manatee to be spotted in Maryland.

His renown was heightened by two more confirmed sightings in the Bay in 2001 and 2011. 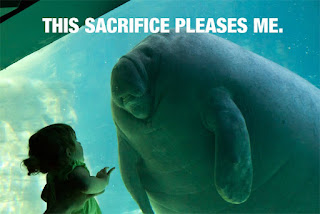 Was this to be the end of Chessie’s far-wandering ways? Not quite. In fact, not long after his release into the wild last May, the manatee, who is believed to be at least 35 years old, showed he has quite a bit of life left in him.

“He very quickly made tracks north,” said Monica Ross, a senior research scientist at the Clearwater Marine Aquarium, which had attached a satellite tag to the manatee to track his whereabouts. The public could also follow his movements on a website operated by the aquarium. 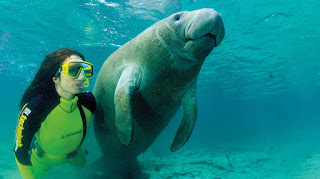 I'm skipping a lot of history.

Chessie, now tipping the scales at 1,500 pounds, was released May 12 just north of West Palm Beach, FL. By May 23, he had trekked to the mouth of the St. Johns River near Jacksonville, about 300 miles up the coast. Over the next month, the satellite tracker showed him swimming several miles up the river as well as farther north along the coast to within a few hundred yards of the Florida-Georgia state line.

But after the tag sent up a signal near Blount Island in the St. Johns on June 27, there were no more pings. The tag was connected to a float ring that towed behind the large, gray animal. Because the signal was lost in the early evening near a shoreline, Ross said she is “100% convinced” the tag was bitten by an alligator.

“It’s something in the water column and they’re looking for food, so they will bite our tags,” she said.

Where and when Chessie will pop up again is anyone’s guess now. Ross urged anyone who spots a belt-wearing manatee to report the sighting to their state’s wildlife agency.