But first, I'm starting this morning with the Wombat's In The Mailbox: 08.25.21, which features The Geller Report: Forensic Audit Of 2020 Election Moves Forward In PA, also from HE, Top Pennsylvania GOP Senator Supports Forensic Election Audit. Pennsylvania provided most of the electoral votes for Biden's "victory". If it can be shown that a substantial portion of his thin margin may have been fraudulent, we can be fairly sure the election was stolen, fair and square.

But not if the derp state has anything to say about it. Also via the Wombat, Volokh Conspiracy: Federal Judge Beaches Kraken, Orders Sanctions. Also, from Law and Crime, ‘This Case Was Never About Fraud’: Federal Judge Refers ‘Kraken’ Attorneys, Including Lin Wood and Sidney Powell, for ‘Possible Suspension or Disbarment’. Over at Hot Hair, AllahPundit just wet himself with glee, Kraken down: Federal judge sanctions Lin Wood, Sidney Powell for election lawsuits, refers them for possible disbarment. Judge Linda Parker was appointed by Barack Obama. When we start going after lawyers for representing their clients, we are well on our way to totalitarianism. 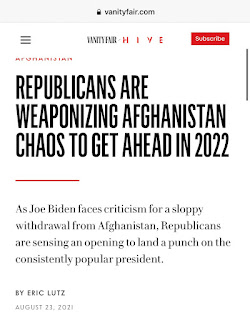 Ace, Quick Hits: Seizing and Pouncing Edition. ->
Conservative Brief reports Illinois Redistricting Will Likely Cost RINO Rep. Adam Kinzinger His Seat and Politico asks How screwed is Adam Kinzinger?. I guess sucking up to Nancy Pelosi wasn't worth it after all. But don't ever let Democrats lecture you about Gerrymandering.
Time (they're still a thing?) reports Joe Manchin Faces Protests from the Left at Home in West Virginia on voting "rights". What, all three leftists in West by God Virginia?

ET, The Era of ‘Zuckbucks’ in Florida Election Administration Ends


The last of the three Florida counties that took grant monies from a left-wing activist group funded by Facebook founder Mark Zuckerberg to help administer the 2020 elections has returned the remaining funds to the group after a new state law banned such grants, according to the Public Interest Legal Foundation.

Zuckerberg and his wife, Priscilla Chan, supporters of President Joe Biden and Democratic Party candidates, grabbed headlines during the last election cycle by giving as much as $400 million to the Chicago-based Center for Technology and Civic Life (CTCL).

CTCL in turn then distributed the money in the form of grants to jurisdictions across the United States purportedly to help those governments hire more staff, buy mail-in ballot processing machinery, and pursue other measures they considered necessary to administer the elections during the ongoing pandemic. Critics complained that CTCL’s grants favored Democrats because they tended to go to the electoral apparatuses in Democratic strongholds and that the funds were part of an attempt to unfairly influence the outcome of the elections.

Byrd is a controversial figure with a record of mishandling firearms, including once leaving a loaded pistol in a Congressional Visitor Center bathroom. Roberts said Byrd’s decision to fire his weapon on January 6 indicated his unfitness for duty.

“If I was a congressman, I’d be very concerned about him carrying a gun around me,” he said.

Typically, police officers who shoot civilians are named publicly. But the January 6 riot and the riots that erupted after George Floyd was killed by a Minneapolis police officer, divided the country along political, class, and racial lines—making officials cautious about revealing the name of a Black police officer who killed a white protester.

Roberts said race was “clearly a factor” in the decision to shield Byrd from public scrutiny.

“It’s something that has to be considered, because it’s just a clear pattern in the United States,” he said. “A white cop kills a Black individual? Their name is out there within a day. It’s all public. And look, a police officer is a public official. There should not be any exception for this.”

For a look at what prompted this disclosure, let's go once again to Ace, Lester Holt Will Present the Defense for Ashli Babbit's Executioner

He will of course be presented as the very first cop to commit the trans-racial killing of an unarmed suspect who acted completely heroically and not at all motivated by bloodlust or racial animus.

Atop Da Hill, Secret Service warned Capitol Police about threats on Jan 5: report. So why didn't they act to stop it? Nancy wants to find out, by subpoenaing meme makers (as well as a number of Republican congresscritters. At Da Wire, Jan. 6 Committee Requests Records From Dozens: Trump White House, Right-Wing Journalist, Meme-Creator. They cannot stand being mocked. At PM,  Pelosi's Jan 6 committee makes blacklist of conservative media figures. "This is a chilling power grab. Resist." Sundance at CTH, Nancy Pelosi, Bennie Thompson and J6 Committee Start Fishing Expedition – Seeking All Communication From Political Opposition in Preparation For 2022 Mid-Term Opposition Research.   Just remember, turn about is fair play. From JTN, Trump accuses Jan. 6 committee of distracting from Biden's 'failures,' will defend exec privilege "Trump called the Jan. 6 committee "a partisan sham and waste of taxpayer dollars." Nancy doesn't see it as a waste, she sees it as an investment. The Morning Report at Ace's, "They said if we vote for Trump, we'd have a fascist dictatorship. And they were right!"

At Am Think, Silvio Canto thinks I guess we'll go back to talking Three Wise Men on January 6th

So where are we now? It appears that a lot of people, especially in the news media, have a little explaining to do, as Julie Kelly wrote:

The Justice Department now seems to be prepping the ground for a major letdown. “The FBI has found scant evidence that the Jan. 6 attack on the U.S. Capitol was the result of an organized plot to overturn the presidential election result,” Reuters reported August 20. Nearly all of the cases, four former and current law enforcement officials said, are “one-offs” while roughly five percent are associated with so-called militia groups.

“FBI investigators did find that cells of protesters, including followers of the far-right Oath Keepers and Proud Boys groups, had aimed to break into the Capitol. But they found no evidence that the groups had serious plans about what to do if they made it inside,” the unnamed sources told Reuters.

So something happened but not an effort to overthrow the U.S. government or an insurrection.

Looking back, my gut feeling turned out to be right. I recall going locally on TV and saying that I did not think the rioters were Trump supporters. Why not? Because violence and chaos were never part of Trump rallies. Did you ever hear of Trump supporters burning cities or attacking the police? Secondly, I always wondered about Capitol security. How could a major U.S. federal building be this unprotected? What if real terrorists with bombs had actually attacked the Capitol?

So drop the probe unless we are looking into who decided to leave the Capitol unprotected.

And more news of the real insurrection from Jon Sexton at Hot Hair, Matt Taibbi: This Antifa attack on a reporter deserves more attention

Today, Matt Taibbi has written a piece about the incident headlined “Enough is Enough: Antifa Attacks Reporter in Portland.” After going through what happened to reporter Maranie Staab, Taibbi simply points out that Antifa makes a habit of attacking reporters even though they have no expectation of privacy on a public street in the middle of the day.
. . .
He concludes by saying, “Too many news outlets have respected the desire of such protesters to remain invisible when they behave atrociously, and this is one of those cases.”

Antifa is the enforcement arm of the left. So left-wing media cover for them, it's that simple.