A lot of material, but not a lot of coherence. That sort of makes it hard to put into some form of order, kind of like real life.

HE finds Georgia Elections Board Moves Toward Eventual Fulton County Takeover and at Da Blaze, GOP-led Georgia Election Board takes first step in potential takeover of Fulton County elections. If you can't do it right, let someone else. It's the state's job ultimately anyway. Sundance reports Teddy Daniels Gives Forceful Speech at Pennsylvania Audit The Vote Rally, The Time is Now. Video at link. At JTN, A New ballot initiative would require ID for all voting in Arizona, "The Arizonans for Voter ID Act ballot initiative asks the secretary of state to further ID requirements for in-person voting, individuals returning a voter’s ballots, and mail-in voting." Darn citizens butting in where their betters know better. Michael Ginsberg at Da Caller reports Republican Flips State Senate Seat Where Biden Won By 25% in deep-blue Connecticut. A one-off or a harbinger of things to come? 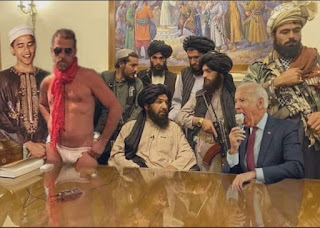 Paul Bedard at WaEx claims Trump would beat Biden today, more women and blacks support and at TNP, Stunning Poll Reveals Trump Would Win Election Held Today, As Nearly 1 In 10 Democrats ‘Regret’ Their 2020 Vote.  Ace, Rasmussen, Reuters: Biden's Ratings Plummet After Bloody Fiasco in Kabul, Falling to 46%. Unfortunately, the election is not held today. Stephen Kruiser at PJ Media, it's a Shame We Can't Use the 25th Amendment on All of Team Biden.

In sum, election officials nationwide mailed out 14.7 million ballots in 2020 that, one way or another, went unaccounted for. And that’s just the start of the problems. . . .

By “unaccounted for,” PILF means that EAC reports the ballots “were not returned as voted, were undeliverable, or were otherwise ‘unable to be tracked.’” Nobody knows whether someone actually tried to vote with those ballots only for the Postal Service to lose them or whether would-be voters decided not to bother or whether the ballots were mishandled by “ballot harvesters” (including well-intentioned ones) or whether some were part of a fraud scheme.

PILF isn’t claiming some massive vote fraud, and it is not trying to relitigate the presidential election. Its point is that a combination of human error, systemic sloppiness, and perhaps even a bit of skullduggery together make it almost impossible to know if some close election counts actually were accurate.

“We shouldn’t be allowing the Post Office to determine who our elected leaders are,” said J. Christian Adams, president of PILF and also one of the eight members of the U.S. Commission on Civil Rights .

Victor Morton at WaT says Juan Williams says AG Merrick Garland ‘has the power’ to stop Trump 2024 bid: ‘It is time to use it’. What bullshit. Also bullshit, from Dan Chaitin at WaEx, Bannon says Trump should become speaker, lead Biden impeachment, resign, and run for president in 2024. Never gonna happen, but you can fill an hour or two of radio with it.

To get rid of Trump, some people felt it was necessary to say things about Joe Biden that aren't true--that he is competent, for example, compassionate, caring, even wise. For some to say it, they had to find a way to make themselves believe it. Now reality has come crashing in.

AllahPundit at Hot Hair whines that Larry Elder says Look, give me a do-over on what I said about Biden having won the election fair and square "Give me a mulligan on that one…no I don’t." Also at Hot Hair, Karen Townsend sends Texas Supreme Court rules runaway Democrats can be arrested. Stop talking about it and get down to business.

Jazz Shaw at Hot Hair, Twitter: Sure, the Taliban spokesman can keep his account. As long as he doesn't say Trump won the election.

Correct me if I’m wrong, but hasn’t Twitter been lecturing all of us about their zero-tolerance policy regarding violence? Have they ever even heard of the Taliban? You can get banned from the platform for tweeting “Blue Lives Matter” because that somehow promotes violence against minorities or something. But the guy whose soldiers just literally murdered a woman in cold blood in front of a camera for not wearing a burqa doesn’t promote violence?

Page 6, Larry David ‘screamed’ at Alan Dershowitz at grocery store over Trump ties, but not over Biden lies.

Now, consider the case of Karl Dresch. Forty years old, from the Upper Peninsula of Michigan, Dresch came to Washington -- his first time ever in the city -- for the January 6 "Stop the Steal" rally. He listened to President Donald Trump's speech and then joined a crowd heading down the Mall toward the Capitol. And when he got there, he...walked in through an open door. He wandered around for perhaps 20 or 25 minutes, and then left. 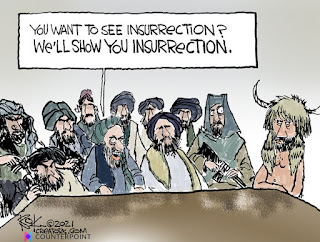 The Pink Report, Pelosi Hints That Jan. 6 Commission Is Investigating GOP Reps. Jordan And Banks, when they should be investigating Nancy Pelosi. Fox, CBS’s Stephen Colbert compares the Taliban to Americans in Capitol Riot. The lesson is to bring more people and guns.

Daniel Greenfield at Front Page, While Afghanistan Fell, Military and CIA Focused on Diversity. Their priorities are showing.