Yeah, I know, this series has morphed in to a thread about elections and their consequences in general.

At Am Great Adam Mill wonders Why Do Capitol Hill Police Keep Turning Up Dead?. Personally, I suspect it's because Jan 6. Capitol Incursion touched off a witch-hunt for "racist" Capitol Police officers. There's plenty of evidence that many opened doors and let the rioters in. They had to be worried. Prove me wrong. Also at Am Great, Joe Kent has more Questions About Feds’ Involvement in January 6 that Demand Answers. The FBI et al have infiltrated (and supported) a wide range of right-wing groups, it's almost unbelievable that they did not have agents and/or snitches at the Capitol that day. The FBI (as a whole, not individual agents) is evil, not incompetent.

1) How many confidential human sources (CHS), intelligence sources, agents, informants, or undercover law enforcement officers were present at the Capitol on January 6?

2) What role did these sources/agents/undercovers (SAUs) play during the events of the day?

3) How and what did the SAUs report to their controlling officers on January 6 and prior to that day?

4) How many SAUs were in direct contact with individuals currently detained or charged by the Justice Department?

5) How much involvement were SAUs allowed to have in illegal activity on January 6 or prior to that day?

6) Were the SAUs instructed to report threats of imminent danger? How many reported any plans to attack prior to January 6 or attacks in progress that day?

7) Prior to January 6, how many SAUs had infiltrated or were reporting on groups or individuals planning violence against the Capitol?

Like a dog with bone, Julie Kelly at Am Great chews on The Justice Department’s ‘Troubling’ Discovery Delays, "January 6 defendants appear to have practically no shot at a fair trial in Washington, D.C. Some judges are finally pushing back." Good.

The FBI used a bureaucratic workaround to investigate a women's group with a socially conservative agenda, despite having no "particular factual predication" for wrongdoing, according to a document disclosed under the Freedom of Information Act.

The revelation outraged top Republicans on the House and Senate Judiciary committees, who are demanding an explanation from FBI Director Christopher Wray.

The July 2016 review of Concerned Women for America (CWA) for the "possibility of fraudulent activity" was based on its two-star rating (out of four) by Charity Navigator, which evaluates nonprofits for their financial health and transparency, according to the FBI "charity assessment."

The redacted FBI form emphasizes that CWA, whose leader was a public supporter of then-candidate Donald Trump, "underperforms most charities in its Cause" by Charity Navigator's standards. It's also listed among "non-disclosure charities" by the BBB Wise Giving Alliance, meaning it didn't consent to evaluation by that charity watchdog.

My guess, without bothering to check, is that in compliance with O'Sullivan's Law, Charity Navigator has become a left-wing shill.

Da Wire reports U.S. Army Vet Who Converted To Islam And Supported Violent Jihad Convicted In Plot To Bomb California Rally. A couple of points. It was a "right-wing" rally he intended to bomb, and an undercover FBI agent facilitated the plot by offering to make the bomb (this guy bought nails to put in the bomb allegedly). Would he have ever gotten there without the "assistance" of the FBI? Who knows.

WaPoo whines, What Rosen told U.S. senators: Trump applied ‘persistent’ pressure to get Justice to discredit election. The title contains a little sleight of hand; he applied pressure to get DOJ to investigate possible election fraud. They wanted to do as little as possible. Politico is even more flagrant with it's deception, Emails: Senior DOJ officials wrangled over baseless Trump voter fraud allegations, inserting the customary "baseless." Apparently in agreement, AllahPundit crows about "You're kidding yourself": Voter fraud isn't the reason Trump lost the election, says Dan Crenshaw. Business Insider, Republican Rep. Dan Crenshaw is heckled at a fundraiser for insisting the 2020 election was 'absolutely not' stolen from Trump.

Greg Sargent at WaPoo opines The GOP strategy for retaking power is about to take an ugly new turn. He means  redistricting and Gerrymandering. Get back to me when your ready to fix Maryland.  NYPo, Census data used to draw congressional maps unveiled

With the new data, Republicans could see an advantage, with shifts in population and state legislatures in key swing states holding jurisdiction over certain states, many of which hold jurisdiction over redrawing the congressional lines.

With the population shifts, Texas is set to gain two seats, while Florida, North Carolina, Colorado, Montana and Oregon will each gain one seat. California, New York, Ohio, Michigan, West Virginia, Pennsylvania and Illinois are each slated to lose one congressional district.

At Da Caller, Here Are The Clear Reasons Why Hispanics Are Moving Away From The Democratic Party. Basically, because the Democrats are the party of crazy. From Breitbart, Trump Ally Grenell’s ‘Fix California’ Identifies 1.3 Million California Conservatives Not Registered to Vote. Not enough to turn the state, but maybe enough to capture some House seats.

Mesa County must replace its election machines following a data breach, the Colorado secretary of state ordered on Thursday. ''According to the order, Mesa County election officials must replace 41 voting machines after an investigation revealed that software passwords"

were compromised. So it's easier to throw them out and start fresh with machines pre-compromised from Dominion?
At Front Page, a Mark Dice Video: Arrest Americans for Questioning the 2020 Election?. 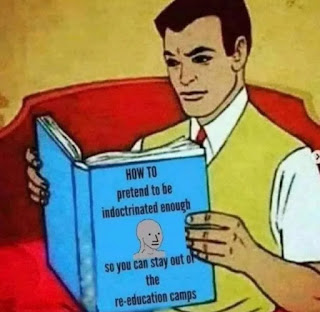 Grabien, a popular site conservative outlets use to obtain news clips, has been battling YouTube’s censorship over the past several months, starting in May when the tech giant blocked a Grabien video that featured a concerned mother denouncing child mask mandates. On Tuesday, Grabien founder Tom Elliott lamented that YouTube demonetized his company’s channel one week after it pulled a clip featuring former President Donald Trump speaking at the Conservative Political Action Conference (CPAC).

WaPoo,  The Technology 202: Google and Apple face a new threat in the Senate. The House is set to follow.

The bipartisan legislation would deal a massive blow to Google and Apple by prohibiting them from giving their own apps preferential treatment or punishing developers that offer their apps for different pricing elsewhere, as well as ending requirements that app providers use an app store’s payment system. Critics say the companies use those tactics to enrich themselves while squeezing smaller competitors, as my colleague Cat Zakrzewski reported.

It's a start, but it doesn't get to the heart of the censorship issue. Which, of course, Democrats have no interest in doing.

At Breitbart,  Eric Holder: ‘Citizens Need to Be in Streets’ Getting Arrested over Voting Rights. Of course, he means his side, but what happens when The Silent Majority is Going to Get Loud (Am Think). They'll just call them racist White supremacist's, like usual. Max Morton at Da Fed  believes The Biden Administration’s Extremism Is Fuel For Domestic Unrest Establishment, "gaslighting and threats from the Biden regime’s increasingly unhinged national security surrogates is itself becoming a radicalizing agent."

The NYT (cited at Hot Hair) is pissed that Watchdog to scrutinize Tucker Carlson's claim that NSA spied on him. 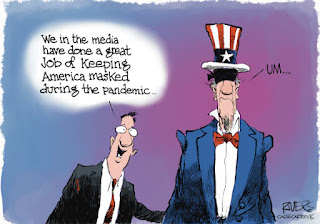 And last, sundance at CTH thinks the hoopla about the "lambda" variant is about maintaining mail-in, drive-in and ballot harvesting for the 2022 election: Next Up, Vaccine Resistant COVID Lambda Variant From Central and South America, The 2022 Mid-Term Lock-down and Mail-In Ballot Variant.
Linked at 357 Magnum in Saturday Roundup of Link Roundups - 14 August.
Posted by Fritz at 11:12 AM