The Jan. 6 thread seems a little thin today, only a single entry, but it's a hopeful one, via  the Wombat's In The Mailbox: 08.10.21,  bulldog Julie Kelly reports from Am Great that the Appellate Court Overturns Pre-Trial Detention for J6 Detainee. Will they take the hint and grant bail to the large number of people being held without bail on charges which are likely be reduced to misdemeanors? Or will they make each one appeal separately?

In a stunning but well-deserved rebuke, the D.C. Court of Appeals on Monday ordered that the pre-trial detention of George Tanios, one of two men accused of spraying Officer Sicknick and others on January 6, be reversed.

The brief ruling, which did not include the usual opinion explaining the court’s decision, bluntly stated:

Tanios and his friend, Julian Khater, were arrested in March. A grand jury indicted the men with numerous felonies including conspiracy and assaulting an officer with a “dangerous or deadly weapon.” Tanios and Khater brought chemical irritants, including bear spray, to the capital in anticipation of scuffles with leftist agitators. Tanios, however, is not accused of spraying his key chain pepper spray container. Their arrest and indictment are aimed at keeping alive the lie that Sicknick was killed in the line of duty by Trump “insurrectionists,” a falsehood repeated in the news media and by Joe Biden as late as Thursday at the White House.

Biden’s Justice Department asked the court to keep Khater and Tanios behind bars awaiting trial. They have been incarcerated in the harsh D.C. Deplorable jail since March; Tanios has no criminal record, operated a college campus sandwich shop (which is now shuttered) in West Virginia, and is the father of three young children.

“The record reflects that Tanios has no past felony convictions, no ties to any extremist organizations, and no post-January 6 criminal behavior that would otherwise show him to pose a danger to the community within the meaning of the Bail Reform Act,” the three Circuit judges wrote in the August 9 opinion.

Georgia Star, Fulton County Elections Officials Contradict Georgia Public Broadcasting About the Source and Status of Missing Absentee Ballot Chain of Custody Documents. Given the choice between Fulton County and NPR, I choose to remain skeptical about the whole business.

And that brings us to Mike Lindell, and his symposium on the election and possible cyber hacking. Sundance at CTH has Mike Lindell Cyber Symposium August 10, 11, 12, Ongoing Livestream Links. But he has also highlighted two talks, first, Video During Cyber Symposium Shows Forensic Perspective of Who, What and How U.S. Voting Data Was Modified. I didn't get much out of this except that China has the means, motivation and opportunity to screw with our elections. However the second, Stunning Video Explanation – Dr Douglas Frank Shows How The 2010 Census Was Used to Create the Algorithm That Fabricated the 2020 Electronic Vote Outcome. I can't seem to embed the Rumble video, or I would. We've seen him before, and he certainly seems to have something. I'm just not sure what. He also finds some Conspicuous Timing as Dominion Voting Systems Sues Newsmax, OAN and Patrick Byrne on Same Day As Mike Lindell Cyber Symposium. Also, at Reuters Dominion sues Newsmax, One America over U.S. election fraud claim and WSJ (cited at Hot Hair), Dominion sues Newsmax, OAN, others over election claims. Doth they protesteth too mucheth?

Cutie Pavlich at Town Hall is first with The NSA Unmasked Tucker Carlson and Now the Inspector General is Investigating, Sophie Mann at JTN, NSA watchdog to investigate allegations of spying on Fox News' Tucker Carlson  PM, Tucker Carlson’s allegations of spying being investigated by NSA watchdog and Gleen Grenwalt, The NSA's Inspector General Opens Investigation Into Allegations of Illegal Spying on Tucker Carlson. Ok, I understand how Tuckah was overheard while trying to schedule an interview with Vlad, I understand how he came to be unmasked. That all seems legit. What is patently illegal is leaking that result to the press. Find who did it it and put them in the hoosegow. 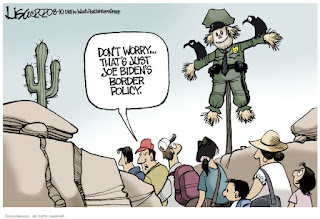 
Third, I believe that these politicians are planning ahead. Joe Biden’s immigration plan offers a path to citizenship in eight years. So if the Biden-Harris administration allows children ages 10 and up to flood into the country, the Democrats can expect to have an army of new Democratic voters a mere eight years from now. The Biden-Harris folks know exactly what they’re doing.

And if that doesn't work?  Jonathan S. Gould and Nicholas Stephanopoulos want to Pay People to Vote and from PM, Rep. Ayanna Pressley and Kendi push for voting age to be lowered to 16 because of 'racism'. Don't let 'em vote until they're old enough to buy their own gun.

JTN, YouTube censors Rand Paul, senator accuses tech giant of becoming 'arm of the government' for saying things that Google doesn't approve of about WuFlu.  "Paul says he's turning to other platforms like Rumble to upload content that YouTube censors"

"I think, for the most part, the first amendment doesn't apply to these entities but if they become an organ for the government, if they are taking CDC pronouncements, which I think there is science on the other side of this to argue against the CDC, which has become very politicized; if they are taking government edicts and then enforcing them, are they a private entity any longer or are they becoming an organ of the government? I think it's terrible for free speech," he also said.

Break up the tech monopolies.