Why You Never Take Marriage Counseling from a Feminist


Becoming a licensed marriage and family therapist in California is so easy that even people who are against marriage can do it, as is the case of “sex-positive” therapist Moushumi Ghose. She has a “private practice specializing in sexuality, alternative relationships and lifestyles including kink, polyamory, gender non-binary, lgbt and more.” Not sure what the “and more” might include, but Ms. Ghose identifies as “queer” and has written at length of her opposition to monogamy, so she is theoretically in favor of anything except normal heterosexual relationships. 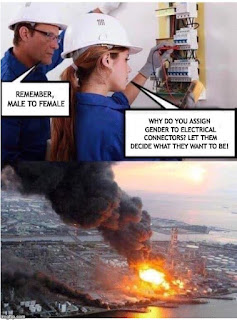 Do people practicing “alternative relationships and lifestyles including kink, polyamory,” etc., have much need for licensed therapists? And if so, what goes on in such therapy sessions? Does it involve whips and chains? It is difficult to believe there is much demand for Ms. Ghose’s practice, whatever sort of “therapy” it may involve, because kinky freaks are more or less making up the rules as they go along. How can someone say their “gender non-binary” polyamorous partner has violated the rules or that their “alternative relationship” fails to meet their expectations? Exactly what rules or expectations apply in such a “relationship”? . . .

I'm going to stop you right there, Stacy. Eric Hoffer said  “Every great cause begins as a movement, becomes a business, and eventually degenerates into a racket”. What we see here is the LGBTQRSTUVWXYZ movement turning into a racket.

Just don't get caught trying to make a business out of gay conversion therapy.