A little bit of Russiagate survived the St. Patrick's Day festivities. Starting with the obvious, from Sundance at CTH, Devin Nunes Confirms Central “Spygate” Element: Chris Steele Did NOT Write the Dossier…. Of course not, he's a boss, and bosses don't do work, they hire people like Nellie Ohr to do work:

The one consistent discovery that CTH has been hammering home over a year-and-a-half, is that Chris Steele did not write the dossier. The information within the dossier was a collection of old research by Glenn Simpson and Mary Jacoby at Fusion-GPS; in combination with new research, claims and details provided by Nellie Ohr.


But in an abbreviated aside, Ohr causally revealed one communique with Simpson that indicates the Fusion GPS founder pushed another false story that unleashed multiple federal investigations into the NRA.

During questioning, Ohr stated that Simpson mentioned “that Cleta Mitchell became aware of money moving through the NRA or something like that from Russia.” Ohr added that Simpson claimed that Mitchell—a D.C. attorney specializing in campaign-finance law and a former member of the NRA board of directors—“was upset about it.” But when asked how Simpson found out about Mitchell, Ohr testified, “I don’t think he said.”

Ohr’s testimony confirms that Simpson holds responsibility for peddling this fake story about the NRA and Mitchell that later made its way to the FBI and congressional investigators. House intelligence committee Chairman Adam Schiff even called Mitchell out by name in the “Minority Report” he issued upon the House Permanent Select Committee on Intelligence (HPSCI) announcement in March 2018 that it was shutting down its Russia investigation.
. . .
Mitchell stated point-blank that the accusation was false, and the blog Powerline published the series of email exchanges between Mitchell and the McClatchy authors: “No. I have no knowledge of anything like this and zero concerns whatsoever about anyone—Russians or otherwise—who ‘funneled’ funds to / through NRA,” Mitchell told Stone via email. “Anyone who says otherwise is lying. [The] NRA is meticulous about following all the rules,” the former NRA Board member added. Mitchell also stressed that she “had zero involvement with the NRA since [her] board term expired in 2012.”

A month later, in April 2018, the Senate Select Committee on Intelligence also contacted Mitchell seeking “records of her contacts with specified Russian and Russian entities.” Mitchel promptly responded, stating she had “no information about any of the individuals referenced in your letter.”

Mitchell continued: “Whatever stories Glenn Simpson, Dan Jones, and other operatives associated with Fusion GPS, have told your staff about me, they are lying. They have made false statements regarding my knowledge, or role, or information in my possession related to the persons listed in your letter – none of whom had I ever heard of before reading their names in the erroneous news reports falsely accusing me of having some information that you now think I have. The story is false and you are wrong. I have nothing whatsoever to say on this topic other than it is a lie, completely fabricated and concocted by Glenn Simpson & Co. You should be pursuing them for perjury and for making false statements to congressional investigators.”

OAN, Judge Unseals Steele Deposition, Sen. McCain Associate Confirms He Gave Dossier To Buzzfeed, Yep. McCain and camp hated Trump with a passion, and was willing to promulgate a lie to deep six him. 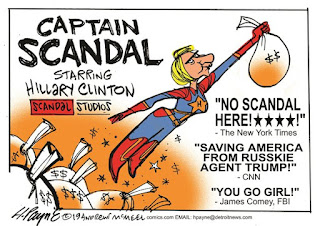 
Andrew Weissman, often referred to as Mueller’s “pit-bull,” has been the lead investigator on the highly partisan special counsel team. He is known for doing “whatever it takes to win.” He recently announced he would be stepping down from both the special counsel and the DOJ.

Ohr briefed both Weissman and DOJ prosecutor Zainab Ahmad, who is also a member of Mueller’s team, in the summer of 2016, and “warned them that the anti-Trump dossier compiled by former British spy Christopher Steele was not properly vetted.”

Investigative Reporter Sara Carter reported that on March 1, 2019, Reps. Mark Meadows (R-NC) and Jim Jordan (R-OH) sent a letter, which can be viewed here, to new Attorney General William Barr requesting documents and communications about “actions taken or not taken by Weissmann and Ahmad after they met with Ohr.” Meadows and Jordan also included “multiple detailed questions” regarding Weismann and Ahmad that they would like written answers to and requested a response by March 15th at 5pm.

Under normal circumstances, concerns that Trump may have colluded with Russia to win the presidency, would have been investigated by the DOJ. But Deputy Attorney General Rod Rosenstein chose instead to appoint a special counsel. He did so, he said, “to ensure impartiality and independence of those charged with the investigation.”
The federal rules governing the appointment of a special counsel are explicit. It states that:


The special counsel shall be a lawyer with a reputation for integrity and impartial decision making, and with appropriate experience to ensure both that the investigation will be conducted ably, expeditiously and thoroughly, and that investigative and prosecutorial decisions will be supported by an informed understanding of the criminal law and Department of Justice policies.

Ohr’s testimony indicated that Weissman and Ahmad had been made aware of the exact nature of the dossier. This raises the question of how having that knowledge affected their ability to serve on the special counsel team. Did they discuss it with Robert Mueller before he tapped them for the team? Meadows and Jordan would like answers to the following questions.

The Mueller report has been expected “any day now” for the last month. There is no indication that investigators have uncovered any evidence that Trump colluded with Russians. Instead, many allegations made in the dossier have been debunked.


. . . Assuming the authors accept a necessary softening of harsh political verbiage and weaponized innuendo, there’s no reason to doubt the distribution date will change too much. Which brings our discussion to the third anticipated tripwire, the roll-out of ‘The Chosen One’.

Knowing The Chosen presidential candidate always launches from an inorganic baseline narrative established by the professional party machinery; the delivery of the anointed DNC candidate will likely wait until approximately a week after the Mueller report is presented.

Looking toward the political horizon there’s nothing else currently visible that can establish the candidate launch narrative other than The Mueller report.

The deadline for Chairman Cummings is hard: April 15th, 2019. It is unlikely, albeit slightly possible, any extension would take place. So keeping the theme of political planning, the release of the Mueller report has to precede April 15th by enough time for Pelosi-Schumer and the Media to assist the framework of Cummings schedule.

Robert Mueller first, then a combination of the DNC Candidate and Elijah Cummings in sequence. The latter two events (candidate and Cummings) are sequentially flexible depending on how the media responds to the primary event.

The likely sequence is:

Martin Lederman at WaPoo continues to try to tamp down Democratic expectations in Why there may be much less — and much more — to the Mueller report than people expect, while leaving them plenty of room for their own impeachment investigations.


There appears to be a great deal of confidence that the Justice Department will comply with the House resolution: At least one publisher is even advertising for sale “The Mueller Report” — complete with an introduction by Alan Dershowitz, no less — and it’s already a bestseller on Amazon.

Those hoping or expecting to read that report, however, will likely be disappointed. It probably won’t see the light of day. That prospect, however, is not as troubling as it might seem, because the inordinate focus on Mueller’s closing report is misplaced. The document might be only one of three or more “reports” to emerge when the Russia investigation ends. The other reports, which will be submitted to Congress and parts of which may well become public, are likely to be far more revealing and more significant than what’s being called “the Mueller report.”