Don't Be Such a Pussy!


Actress and left-wing activist Debra Messing caught major backlash from social justice warriors after her woke International Women’s Day post of empowering vagina cupcakes was deemed transphobic. In the current year, not all women have vaginas, or something. 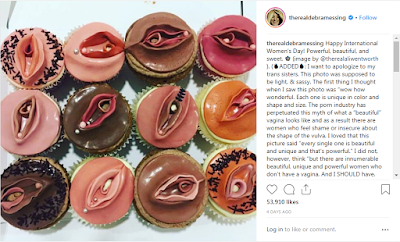 “I want to apologize to my trans sisters,” she wrote. “This photo was supposed to be light, & sassy. The first thing I thought when I saw this photo was 'wow how wonderful. Each one is unique in color and shape and size.'

She's obviously spent a lot of time checking out various vaginas.
Posted by Fritz at 7:26 PM