My Cup Runneth Over with Russiagate

The file where I store them away covers a page, in one day. Good news! The Democrats have not bullied AG William Barr into recusing himself from overseeing the Mueller probe.


Attorney General William Barr will not recuse himself from overseeing the special counsel’s Russia probe after consulting with senior ethics officials, the Justice Department said Monday.

“Consistent with that advice, General Barr has decided not to recuse,” Kupec said in a statement.

James Comey, bless his heart, at WaPoo, Republicans are wrong. Transparency is possible in the Mueller investigation. A self justifying asshole.ABC, Former Trump White House lawyer calls Mueller 'American hero,' says probe is no witch hunt.  “I don't feel the same way about Mueller,” Cobb said in an extensive interview for the latest episode of ABC News' podcast The Investigation. “I don't feel the investigation is a witch hunt.” Man, that's an even better mustache than John Boltons! But David Axelrod isn't quite saying it's a witch hunt, but it too easily plays into the "witch-hunt" meme (Althouse).

Maybe I’m missing something, but the hazard of an omnibus document demand by House judiciary versus discreet, serial ones is that, however legitimate the areas of inquiry, the wide-ranging nature of it is too easily plays into the “witch-hunt” meme.
— David Axelrod (@davidaxelrod) March 4, 2019 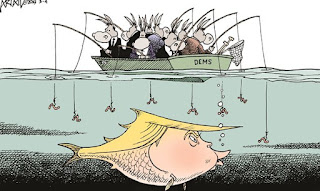 As Roger Kimball documents Jerry Nadler’s frantic quest to ‘Get Trump’ at Da Spectator USA, CNS News reports Rep. Kevin McCarthy: Nadler Is Setting the Framework ‘That the Democrats Are Not to Believe the Mueller Report’, Da Beast finds evidence of long-standing grudge by Nadler against Trump in The Guy Trump Called ‘Fat Jerry’ Is Chairman Nadler Now back when fat shaming was cool. From Politico Democrats’ demand for Trump’s tax returns expected in about 2 weeks. I think the IRS is still withholding documents from Lernergate.


“We’re almost ready to go,” said Pascrell, who’s led a push among lawmakers to use an arcane law to unmask Trump’s tax returns.

“The chairman will be ready in two weeks to send his letter,” Pascrell said. “And I volunteered to deliver it.”

Do they expect the Senate to go along, or are they just going to leak them? ABC, House Oversight Committee, White House in standoff over viewing security documents 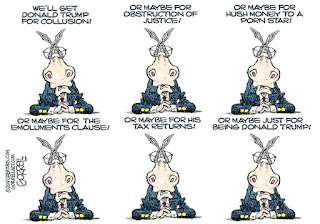 
"They have that power. They can issue subpoenas. They can also abuse that power and they are apparently headed toward that result -- abusing that power," diGenova warned.

He said that the Barr Department of Justice should refuse to produce documents on the basis of executive privilege, predicting that the American people would respect that lack of cooperation.

"If I had a client in this, I would advise him to take the Fifth. I wouldn't turn over anything to this committee," he said.


Trump suggested he was unwilling to comply with the House Judiciary Committee’s requests for documents related to 81 of his associates, citing what he said was former President Obama’s handling of congressional probes during his time in office.


The nine-page subpoena, sent to Aon Plc, was issued days after President Donald Trump's former personal attorney Michael Cohen suggested in testimony to Congress that the Trump Organization had inflated the value of its assets, this person said.

WSJ, Lawyer for Cohen Approached Trump Attorneys About Pardon. Ace, Michael Cohen Did Another Oopsie In His Congressional Testimony


Asked if he ever asked Trump for a pardon, he swore under oath, "No."

But apparently he should have answered: Oh well sure, I mean I might have directed my lawyers to ask Trump for a pardon...

Via the Wombat's In The Mailbox: 03.04.19 the Victory Girls write As Collusion Narrative Implodes, The New Yorker Whines That Fox News Helped Elect Trump, but then, they've been whining about that since Bush beat Gore.

Da Caller has some real news on the real collusion, Fusion GPS Founder Had Contact With State Department Official During 2016 Campaign


One of the co-founders of the opposition research firm that commissioned the Steele dossier was in contact with a State Department official in the days before a news article was published laying out allegations contained in the salacious anti-Trump report.

Emails obtained by The Daily Caller News Foundation show that Glenn Simpson, an executive at Fusion GPS, contacted Jonathan Winer, who then served as State’s special envoy for Libya, on Sept. 19 and Sept. 22, 2016. That was days ahead of the publication of a Yahoo! News article that was the first story to cite information gathered by Christopher Steele, the former British spy who authored the dossier.

Winer, a longtime aide to former Secretary of State John Kerry, was a source for that article, which laid out Steele’s allegations about Carter Page, a former Trump campaign adviser who would become the target of FBI surveillance. 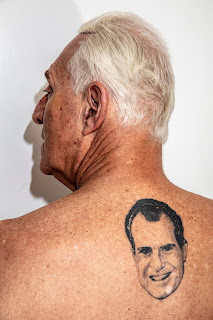 Roger, Roger, Roger! Obama Judge could revoke Roger Stone's bail because his new book calling Mueller 'crooked' is STILL on sale despite gag order – and she says his lawyers are filing motions to 'generate additional publicity' for it


The federal judge overseeing former Trump adviser Roger Stone's criminal trial signaled Tuesday that she might revoke his bail, criticizing him and his lawyers for failing to tell her when she issued a gag order that his latest book – which includes slashing commentary about Special Counsel Robert Mueller – was already on sale.

Judge Amy Berman Jackson also wrote in a signed order that she believes Stone's lawyers misled her last week about the timing of the book's release as a means to generate publicity for it. 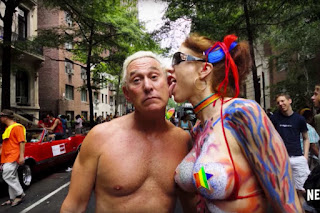 And regardless of when the book first went on sale, she wrote Tuesday, Stone 'may no longer share his views on these particular subjects with the world.'

Jackson ruled on February 21 that Stone would be permitted to raise money for his defense, and to proclaim his innocence, but otherwise forbade him from making any public comments about his trial or the special counsel probe that led to his criminal charges of lying to investigators, witness tampering and obstruction of justice.

I still say the 1st Amendment should allow Stone to plead his case with the public. But maybe he can get a new cool prison tattoo.

The Wombat has Rule 5 Monday: Komi-san Has A Communication Problem and FMJRA 2.0: Four Wheel Drive ready and waiting.
Posted by Fritz at 8:33 AM