Navy to Pay $64 Million for Bay Clean Up


The U.S. Departments of Defense and the Navy are ordered to pay nearly $64 million in cleanup costs, for decades of contamination at a wood treating facility in Portsmouth.

The Atlantic Wood Industries (AWI) Superfund Site is on the Southern Branch of the Elizabeth River, just north of the Norfolk Naval Shipyard’s Southgate Annex. The site, which includes more than 50 acres of land and more than 30 acres of river sediments, was contaminated for decades.

A proposed settlement would give the Environmental Protection Agency (EPA) $55.3 million and the state of Virginia $8.5 million. The EPA has been working for more than eight years to clean up hazardous substances, the agency lists as “polycyclic aromatic hydrocarbons from creosote, pentachlorophenol, and associated dioxin, as well as heavy metals present in soils, ground water, and sediments at the site.” 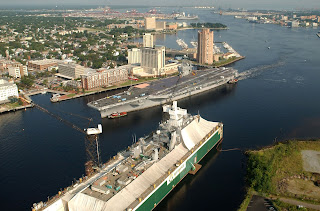 At one time, the EPA says the Navy leased part of the property from AWI and disposed of waste contaminated with copper, lead, zinc, and arsenic. The Navy along dumped sludge in a wetland on the borer of the Shipyard and AWI site.

For the Elizabeth River, Virginia has issued a “DO NOT EAT” advisory for blue crab's yellow mustard. EPA warns pregnant women and children to limit their crab consumption. A particularly alarming warning on the EPA’s website reads, “Walking in the river near the banks of the Site could result in a skin burn due to the presence of visible creosote in the sediments.”

Virginia also has issued fishing advisories and a ban on eating oysters from the area due to contamination.

Along with cleanup costs, DoD and the Navy will fund a $1.5 million oyster restoration project to be implemented by Virginia in the Southern Branch of the Elizabeth River. The owners and operators of the Atlantic Wood Industries site, will reimburse EPA and Virginia $250,000 plus interest for site cleanup costs.

The proposed consent decree falls under the federal Superfund law, which requires landowners and operators responsible for contaminating a site to clean it up or reimburse the government. The agreement will be subject to a 30-day comment period and court approval.

The Elizabeth River was one of the three specially designated "hot spots" for toxic pollution in the Chesapeake Bay, thanks to many years of pollution associated with the ship building and other associated industries located there now for over 100 years.  At one time, the Mummichogs that lived in parts of the river had evolved to tolerate PAHs to the point that they actually grew better in their presence.