The big news, of course, is that Paul Manafort was sentenced to 47 months of jail for his tax and bank fraud crimes, far less than the 19-24 years requested by Rod Rosenstein Alan Weissman, with judge T.S. Ellis III going out of his way to point out that the crimes he was accused of were not the result of conspiracy with the Russians to influence the election.

T.S. Ellis III, who was appointed by President Ronald Reagan and serves on the United States District Court for the Eastern District of Virginia, called Mueller’s recommended sentence “excessive.” Instead, the former U.S. Navy aviator, who piloted an F-4 Phantom before heading to Harvard Law School and then Oxford University, handed down a 47-month sentence.

“To impose a sentence of 19-24 years on Mr. Manafort would clearly be a disparity. In the end, I don’t think the guidelines range is at all appropriate,” Ellis said.

“I think what I’ve done is sufficiently punitive, and anyone who disagrees should spend a day in a federal penitentiary,” he said, adding that he wants Manafort to receive credit for the nine months he’s already served behind bars.

He will receive credit for the 9 months already served. Well, at least they imposed socialist medicine on Manafort, who came into court in a wheel chair. He will also be sentenced later for his "conspiracy against the US" charges in a DC court, by an Obama judge. The Peacock, Manafort's light sentence slammed as 'disrespectful,' 'lenient,' 'an outrage'

I wonder if Flynn will ever be sentenced?

Meanwhile, the Muellerwatch continues, ‘Informed’ Rumors Are Saying The Mueller Report Will Drop Tomorrow Or Friday, And It Will Focus On Obstruction Of Justice (RedState)


The National Review’s Andrew McCarthy wrote this morning that he believes special counsel Robert Mueller will submit his report to Attorney General William Barr ‘imminently.’ He does not expect to see much about Russian collusion, rather the focus will be on obstruction of justice. He said it is no coincidence that House Judiciary Committee chairman Jerrold Nadler (D-NY) announced his new investigation into President Trump to search for possible obstruction of justice on Sunday and sent out 81 document requests and subpoenas to Trump associates on Monday.

Thou shalt not fire my former friend, James Comey, even if my other friend Rod Rosenstein said you should. It's not about collusion; it's about obstruction ... and impeachment


That is, when it comes to Trump, the episodes prosecutors have been investigating as obstruction do not involve criminal actions — such as tampering with witnesses, as was done in the Nixon and Clinton impeachment cases. Instead, they involve a president lawfully exercising his constitutional prerogatives, but driven by what prosecutors portray as improper motives. That would be a very controversial theory of obstruction. As William Barr opined in a memorandum written before he became attorney general, a president should not be indicted over conduct in a gray area — it should be only over misconduct that is clearly criminal and serious.
. . .
I believe the so-called Russia-gate probe ultimately will be shown to have begun early in 2016. It may not have been formally opened on paper as “Crossfire Hurricane” until months later — until late July or early August. The murkiness is intentional. There is queasiness on the part of intelligence agencies, both because they were scrutinizing the incumbent administration’s political opponents in the midst of a contentious presidential campaign, and because they were aided and abetted by at least one foreign intelligence service — something that should not have happened; something the revelation of which could damage an information-sharing arrangement critical to national security.
But for however long investigators have been at it, and certainly since Mueller’s investigation came into full swing after May 2017, it has been obvious that there was no criminal conspiracy. 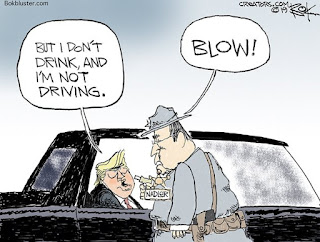 Da Caller, Democrats Poised To Disregard Mueller On Collusion, Launch Their Own Investigations,

“The truth is all this talk about voter integrity and voting rights that we always hear from them, it pales in comparison to [the] Democrats’ desire for power in their inability to recognize Republican victories or conservative victories. They did the same thing to Bush. They called him illegitimate. They hounded him for eight years, saying Al Gore was the true president,” the senior administration official continued.

Mark Levin,  Levin: Rep. Jerrold Nadler’s investigation is a ‘Democrat terrorist operation to hit the president from every angle’

Politico, Democrats Are Totally Impeaching the President "The hardest, but most important, part will be to pick just one good reason first." Orange man, bad!


Senator Chuck Grassley, chairman of the Senate Finance Committee, told reporters that he has no particular interest in requesting the documents from the Treasury Department and does not want to see the Internal Revenue Service used for political purposes.

“If the House of Representatives are going to get them, then I want the Senate Finance Committee to have them,” said Grassley, who as the Finance chairman is the only lawmaker in the Senate authorized to request confidential tax records from U.S. Secretary Steven Mnuchin.

“I don’t want what ... the House Democrats are using the IRS for - for political purposes,” he added. “If they get them, we’ll just ask for them.”

A Grassley spokesman said the Iowa Republican believes that both chambers should have access to Trump’s returns as a way of maintaining proper checks and balances.

4 Different Lies James Clapper Told About Lying To Congress. Are he and Michael Cohen having some kind of contest? Hold my beer and watch this! Via Wombat's In The Mailbox: 03.07.19, the Weasel Zippers have  Lanny Davis Throws Michael Cohen Under Bus, Contradicts His Clients Congressional Testimony   Hot Air.  Did Lanny Davis Confirm Cohen Lied In Testimony About Trump Pardon? Well, his mouth was moving.


Cohen now says he has "incurred millions of dollars in unreimbursed attorneys' fees and costs" which continue to pile up.

Cohen is scheduled to report to federal prison in May for a three-year sentence based on charges lodged by Mueller's team and federal prosecutors in New York. Once a staunch loyalist of Trump's, Cohen broke with his former boss after FBI agents raided Cohen's properties in April 2018.

I'm still curious to know if Weissman threatened Cohen's wife with prison over his insurance fraud.
Posted by Fritz at 7:42 AM