The flow of Democrat attack dogs out of Mueller's office suggests a prosecution tidying up and winding down. Genius intelligence analyst John Brennan, who did such a great job on 9/11, predicted that Mueller would announce indictments this past week (March 8).


March 8 came and went without new Mueller indictments, or at least new public indictments. And now comes news that Mueller's top deputy, Andrew Weissmann -- also known as the special counsel's "legal pit bull" -- will leave the office within the next few days.
Also, the FBI recently announced that Mueller's top investigator, David Archey, has left Mueller to take a top job with the bureau in Richmond, Va. 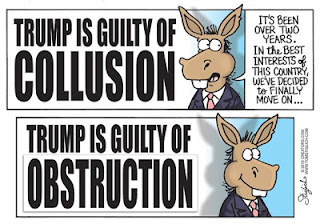 And tea leaves suggesting otherwise, Da Hill,  Mueller, Gates attorneys request sentencing delay due to cooperation in 'several' probes. I heard Gates was helping Mueller in going after Tony Podesta for violating FARA, but this article suggests the Trump inauguration. Reuters, Mueller, in U.S. court filing, says multiple probes continue. Let me guess, he's going to investigate how the Clinton campaign bought dirt on Trump from the Kremlin? Just foolin' with you. That collusion was OK because reasons! NPR, As End Nears To Mueller Era, D.C. Lawyers Fear Lasting Politicization Of Justice


Members of Washington's elite legal community decried the "increasing politicization" of the justice system at a particularly sensitive time: as the special counsel probe of Russian election interference edges toward a conclusion.

Abbe David Lowell, a veteran of high-profile cases who has defended members of Congress and Cabinet officials, lamented that public confidence in the FBI, the Justice Department and the rule of law itself has waned, even as he offered praise for Robert Mueller, the man leading the Russia investigation.

It's only nasty and partisan when directed against Democrats. From Da Hill, Graham blocks resolution calling for Mueller report to be made public


. . . Graham, a close ally of Trump's who chairs the Judiciary Committee, objected after Schumer refused to amend the House-passed resolution to include a provision calling on the Justice Department (DOJ) to appoint a special counsel to investigate DOJ misconduct in the handling of the investigation into 2016 Democratic presidential nominee Hillary Clinton's email use and the Carter Page Foreign Intelligence Surveillance Act applications.

Graham stressed that he supported Mueller's probe into Russian interference in the 2016 election, and predicted that it would wrap up shortly. But he added that he had been "trying to find balance" by also supporting an investigation into Clinton-related scandals.

"Was there two systems of justice in 2016? One for the Democratic candidate and one for the Republican candidate?" Graham asked. 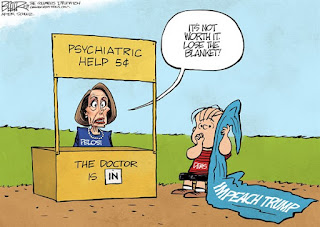 For better or worse, the Congress decided in the new special counsel law, that the report should be a confidential one to the AG, who would vet it and release what seemed appropriate. Now that it's inconvenient to the Democrats, they want to renege on that, without actually having the votes to do so. 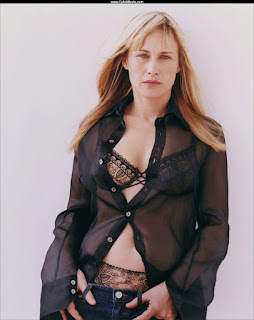 
The Oscar-winner appeared on "The Late Show with Stephen Colbert" this week, so naturally, the conversation veered from her current project plug (Hulu's "The Act") to ... the investigation swirling around President Donald Trump.

Colbert chats have a way of doing that. Maybe it's the tone his nightly, hard-left monologue sets.

Either way, Arquette started the ideological ball rolling by confessing she used to take the host's faux Bill O'Reilly shtick on his old show, "The Colbert Report," seriously. 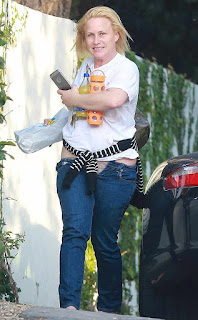 Later in the chat, the conversation turned toward Hollywood's favorite Beltway denizen -- Mueller. Liberal stars have been anxious for Mueller's report, assuming it'll prove President Donald Trump colluded with Russia to steal the 2016 presidential election.
. . .
The actress recently thanked Mueller during a SAG Awards speech. Colbert used that to tee up an Instagram image from the star's account.

Ed Morrissey at Hot Air, Trump: There Shouldn’t Even Be A Mueller Report, You Know. The whole damn thing was launched on false pretenses for partisan reasons, so he has a point. When will Carter Page be indicted!


Basically Robert Mueller just didn't care. I get the sense he didn't want to ask a question because he feared Strzok's honest answers could damage his precious frameup.


If Nellie Ohr sought out Glenn Simpson for the job in 2015, not vice-versa, then it would appear a sting operation from within the CIA (John Brennan) was underway and long planned.

This set-up and design would align with what we already know about the CIA using foreign intelligence assets (Five Eyes etc.) overseas to run against loosely connected Trump campaign people to dirty them up and give the impression needed to initiate the FBI counterintelligence operation known as “Operation Crossfire Hurricane” in July 2016.

If it is factually accurate that Nellie Ohr approached Glenn Simpson, and was part of a process of using that cover to plant corrupt CIA dossier seeds for use by Christopher Steele, then it makes sense Nellie Ohr’s communications with government officials, and the usurping intelligence community, would be a risk; a very serious risk.


"The decision to indict the third time by Cy Vance, to me, is more political than being a prosecutor and it bothers me," Rossi said. "The purpose of that indictment is just one reason: to be a catch-all if the president pardons Paul Manafort."

"If a Democrat gets back in the White House, and the Republicans hope that never happens again, but a Democrat will get back into the White House, that president may pardon somebody. It could be a drug case, it could be a fraud case, and if you have an aggressive state prosecutor, they're going to say, 'you know what? I'm going to indict them because the double jeopardy clause doesn't prevent me from doing that,'" he said. "You'll have the same situation, and it's going to haunt the Democrats. That's why I don't like it."


Trump told Breitbart News in an exclusive lengthy Oval Office interview that Ryan blocked issuance of subpoenas to people he thinks should have been investigated on the political left, and now that the Republicans no longer have the majority in the House, people Trump says Ryan protected may have gotten away with whatever they did that warranted investigation.

Trump said that House Freedom Caucus Chairman Rep. Mark Meadows (R-NC) and his predecessor and fellow conservative Rep. Jim Jordan (R-OH) wanted to be tougher with the left, but that Ryan would not let them.

I like Ryan's budget stance, but most of the rest seemed pretty squishy.