But Did it Work? 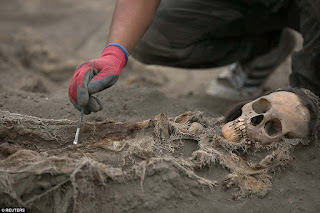 
The remains of 140 children whose hearts were ripped out in a mass sacrifice have been discovered in Peru.

Dozens of boys and girls, aged between five and 14, were killed in the largest known mass sacrifice of children in The Americas.

Many had their hearts removed as part of the grisly spiritual ceremony which happened at the height of the ancient Chimu civilisation in the 15th Century.

Researchers suspect major flooding and storms caused by an El Nino weather event could have sparked a panic to appease the gods with the systematic killing - which was also the largest known llama sacrifice in the world.

The children's skeletal remains and those of more than 200 juvenile llamas found in a 7,500-square foot area were carbon dated to around 1450.
. . .
Professor Gabriel Prieto, of the National University of Trujillo in Peru, said cut marks transecting the sternums and displaced ribs suggest both the children and llamas may have had their chests cut open, possibly during ritual removal of the heart. 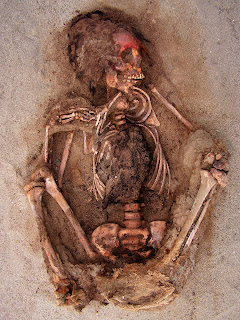 They can't even blame Columbus, who didn't get to the New World until 1492. Even blaming Leif Erikson seems a bit of stretch.


The Huanchaquito-Las Llamas burial site is less than half a mile from the Chimu's capital Chan Chan, a UNESCO World Heritage site.

Its ancient empire controlled a 600-mile-long territory along the Pacific coast and interior valleys from the modern Peru-Ecuador border before the Incan empire took over.

The study findings come after six years of excavation work at the site from 2011 to 2016.

It's not like we're above sacrificing our children's futures in the name of stopping climate change. We won't rip out their hearts though; we'll just deny them the energy necessary for a good life.
Posted by Fritz at 7:00 PM