One nice thing about being retired is that for the most part, the changes in times are irrelevant. The worst part is the TV getting out of step with sun. Talk about a first world problem. Anyway, Russiagate is "late" this morning thanks to the arrival of daylight saving time.


Ohr, who previously worked as the associate deputy attorney general and director of the Organized Crime Drug Enforcement Task Force, told investigators about his communications with dossier author Christopher Steele, and passed along Steele's research to the FBI even after Steele was dropped as an FBI source for providing confidential information to the media.

Ohr was demoted when it was revealed he met with Steele and Glenn Simpson, the co-founder of the opposition research firm, Fusion GPS, which commissioned Steele's work. Ohr also told lawmakers his wife Nellie Ohr was employed by Fusion GPS and shared a thumb drive with him to hand over to the FBI.

The dossier, which contained unverified claims about Trump's ties to Russia, has been a subject of concern for GOP lawmakers, particularly for how it was used by the FBI to in FISA warrant applications to gain the authority to spy on onetime Trump campaign adviser Carter Page.

Collins noted Friday how he and his colleagues have lost patience with the Justice Department in how slowly the agency has handled document requests, including the process of reviewing them for information that would endanger national security, and said he intends to release more transcripts from interviews with Justice Department and FBI officials.

“I intend to make other transcripts public soon,” Collins said on the House floor. “I’m willing to consider any reasonable redactions DOJ makes in a timely manner, but won’t allow these transcripts to remain shrouded in secrecy.”


It would just make sense the place where Nellie Ohr would be researching travel would be the FISA database (FBI/NSA). Where else could she access that information?

Since 2017 CTH research has outlined that Christopher Steele was never the factual source of all the material inside the Clinton financed dossier. Instead all indications of the granular details point toward Christopher Steele as the laundry process where Nellie Ohr and Glenn Simpson’s collaborative work was formatted into an intelligence product known as the “Steele Dossier”.

Our research of central dossier claims, suppositions, accuracy and inaccuracy, points toward a process where Nellie Ohr provided Chris Steele with her research material and then Chris Steele was tasked with verifying, finding second sourcing, and formatting the final product into a series of intelligence documents that could be passed back to the FBI.

In essence, Nellie has always been the material dossier author.

At the conclusion of her effort, providing material she knew the FBI was exploiting for the Trump-Russia ‘spygate’ scheme, the memory stick Nellie provided to Bruce was the totality of all her raw research files. Those files included stuff Chris Steele had already compiled, and research raw stuff that neither was able to verify – and search results that ever made their way into the dossier.

Doug Ross at Journal, Things that make you go "Hmmmmmmmmm..." 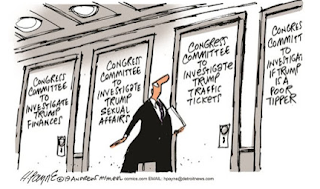 
Indeed. You really have to give it to the suits in Barack Obama’s intelligence services and Department of Justice (many of whom, of course, are still strutting about in Donald Trump’s administration). It was quite a web they wove, and tangled with complexity. Yet their prodigious practice also made it nearly impenetrable to anyone not inside their charmed circle.

That adamantine carapace of impenetrability is a sign of their high style, their assiduity, the reason that a “word of encouragement” did not come amiss.

Put your hand on your heart. Can you really tell me what happened and who all the major players are in the Get Trump farce that has been occupying the nation for more than two years now? There have been various worthy efforts to unpack the drama—I’ve made a few myself—but at bottom it is like Russia according to Winston Churchill, “a riddle, wrapped in a mystery, inside an enigma.”

WaEx, Devin Nunes: Mueller's team is 'part of the collusion'


In a Fox News interview, Nunes said Mueller's team essentially colluded with Democrats to bring down President Trump, by accepting the Democrat-generated Steele dossier as evidence against Trump, and using it to further their investigation.

"These guys were meeting with the Democrats, they were taking in this Steele dossier, which was the dirt," said Nunes, R-Calif.

"So these guys were involved in this the whole time," he added. "They're part of it. The Mueller team is part of the collusion."

As Sundance at CTH has been saying for a long time, Rosenstein, probably with advice from McCabe, Weissman and others, appointed Mueller with the intention of taking over and protecting the investigation that they had initiated at the behest of the Clinton campaign long before the election. Mueller is only the titular head.

From Gateway Pundit, THE LIST: More than 100 Times the FBI, DOJ and/or Mueller Gang “Deviated from Standard Practice” or Committed Crimes in Effort to Exonerate Hillary and Indict Trump. 100 is a long slog, but do it anyway, it's a good reminder of the level of corruption at DOJ and FBI.
More Nunes from RCP, Rep. Devin Nunes: Slander, Libel, Disinformation Campaign By Media Needs to Be Dealt With. Bring back flogging.

At Da Atlantic is Ken White is butt-hurt that Manafort only got 3 years. 6 Reasons Paul Manafort Got Off So Lightly.


One of the reporters behind the controversial BuzzFeed report in January about President Trump ordering his former lawyer Michael Cohen to lie to Congress, which was publicly discredited by special counsel Robert Mueller, refuses to open up about how the story came together.

In an interview with the New Yorker, Jason Leopold also defended his bombshell report with BuzzFeed colleague Anthony Cormier in the face of Cohen's public testimony before the House Oversight Committee on Wednesday in which he denied the president ever directly instructed him to mislead lawmakers — an action for which he has been prosecuted.

Leopold repeatedly asserted he could not or would not discuss the documents and sources that were used as the foundation of his work, citing an aggressive leak investigation by the Trump administration looking for two unnamed law enforcement officials who served as sources. Leopold said, "I don’t even want to discuss" the documents he and Cormier reported were obtained by Mueller's office.


Hundreds and thousands of actions go through the federal courts promptly—Judge Messitte and Judge Sullivan are dedicated judges who do not regularly let motions grow stale beyond the standard 6-month target deadline. So why cannot the President get his motions decided in a timely way just like any other litigant in the federal courts? It is all so difficult to understand.**