Kind of an unproductive day in the Russiagate mines. Newsweek (are they still a thing?) is sad to inform you that Elderly Americans Are Dying Without Getting to Read Mueller's Report - And They're Not Happy About It. I'm kind of looking forward to the end of Star Wars, too, but I don't see that happening. Politico tries to convince us that this is The week that could reveal Mueller’s end-game. I've heard that one before. And trying to stoke fear among Democrats (it's pretty easy, just tell them the sky is falling, again), Reuters warns that Mueller navigates dangerous currents in probing Trump-Russia nexus. Funny, people investigating or ratting on Trump don't seem to meet untimely ends, unlike those investigating or ratting on the Clintons. 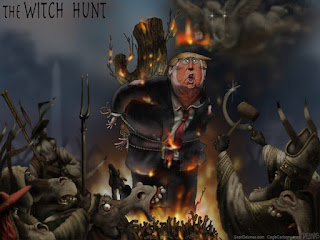 Ed at Hot Air, Schiff To Mueller: You’re Letting Trump Off The Hook! That's how it's supposed to be if you can't find evidence of a crime. At Da Caller, Schiff Acknowledges Mueller May Never Get Trump To Testify. At this point, why would anyone in their right mind want to testify before a group that's clearly not beyond twisting answers to make a perjury trap?

“I also think that the special counsel feels some time pressure to conclude his work,” Schiff added.

Schiff’s pessimistic assessment notwithstanding, Attorney General William Barr did not foreclose the possibility that Mueller could subpoena Trump during his January confirmation hearing for the attorney generalship.

“The question from me would be: ‘What’s the predicate?'” Barr told the Senate Judiciary Committee. “If there was a factual basis for doing it, and I couldn’t say that it violated established policies, then I wouldn’t interfere.”

Of course, the "big" news de jour WaPoo,  Nancy Pelosi on Impeaching Trump: ‘He’s Just Not Worth It.’  Ace, "Democrat civil war a-comin'...". A good time to be a knife salesman in Washington? And Adam Schiff Agrees? AllahPundit, Adam Schiff: Pelosi’s Right, Impeachment Doesn’t Make Sense Unless The Senate Would Remove Trump When has that ever stopped the Congress from doing something stupid and futile? Instapundit, This is know as "cooling the mark out". But who's the mark? Insty thinks it's the Democratic base, but I think it's everybody.

Adam Gopnik at the New Yorker discusses The Pros and Cons of Impeaching Trump. It's the New Yorker so you can imagine the slant they take. Ann Althouse on Gopnik, "I'm posting this because it reads like nonsense to me. I presume it makes perfect sense from inside the bubble." Micahel Barone writing at RCP, Impeachment May Lead Democrats Off the Cliff. I'll be happy to throw some rocks from the top.

And from the American Thinker your daily dose of conspiracy theory Steele and Skripal: A Unified Theory. Unlikely, but much like broken clocks, conspiracy theories are occasionally right.
Posted by Fritz at 9:27 AM