And Over Across the Potomac River 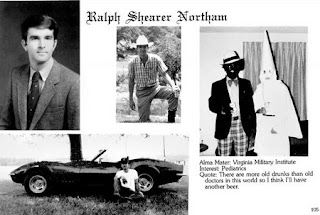 Ralph Northham has the worst day of the worst week. I'll take it from Stacy, although everyone is on it:  Virginia Democrat Governor Posed in KKK/Blackface Yearbook Photo. No word yet on whether he's the white hood or the blackface.


Well, this is certainly embarrassing:


A photo from Gov. Ralph Northam’s medical school yearbook shows him and another person in racist costumes — one wearing blackface and one a Ku Klux Klan robe and hood, though it was not clear which person was the future governor.
The photo, which The Virginian-Pilot obtained a copy of Friday from the Eastern Virginia Medical School library, comes from the 1984 yearbook, the year Northam graduated.
On the half-page set aside for Northam, there is a headshot of him in a jacket and tie, a photo of him in a cowboy hat and boots and a third of him sitting casually on the ground, leaning against a convertible.
The fourth photo on the half-page has two people, one wearing white Ku Klux Klan robes and a hood, the other with his face painted black. The person with the black face is also wearing a white hat, black jacket, white shirt with a bow tie and plaid pants. Both are holding canned drinks.
In a statement Friday evening, Northam, a Democrat, confirmed he appears in the photo “in a costume that is clearly racist and offensive,” but did not specify which person is him.
“I am deeply sorry for the decision I made to appear as I did in this photo and for the hurt that decision caused then and now,” Northam said. “This behavior is not in keeping with who I am today and the values I have fought for throughout my career in the military, in medicine and in public service. But I want to be clear, I understand how this decision shakes Virginians’ faith in that commitment. I recognize that it will take time and serious effort to heal the damage this conduct has caused. I am ready to do that important work. The first step is to offer my sincerest apology and to state my absolute commitment to living up to the expectations Virginians set for me when they elected me to be their governor.”

Ace has discovered that at VMI, Northam’s nickname was “Coonman.”

The end of medical school isn't exactly high school. You're supposed to be a grown up.


He might be wishing his mama had left him out and kept him comfortable, while she had a discussion with the doctor.  Lot's of people, including prominent democrats, are calling on him to resign. However, many others including the WaPoo are rushing to defend him.


He might as well stay, and represent the "diversity" of the Democrat Party.
Posted by Fritz at 9:33 AM