A Tragic Death Near Home 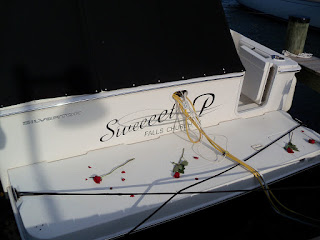 A woman’s body was found at the Flag Harbor pier in St. Leonard Saturday evening after Calvert County Sheriff’s office units responded at 8:30 p.m. in reference to a missing person who had possibly fallen into the harbor. Cpl. Smith arrived at the pier and located the body under the pier.

The victim was determined to be Pamela Fell, 45, who lived on a large boat parked in the first boat slip on the left of the pier. A friend of Fell’s had been attempting to contact the victim since the prior Thursday with negative results, according to a sheriff’s office release. The friend contacted the harbormaster at Flag Harbor and asked him to check on Fell. The harbormaster went into Fell’s boat and observed a purse on the floor of the rear boat deck, the lights and television on inside the cabin and only the screen door closed. Fell’s cellphone was retrieved from the purse on the boat. 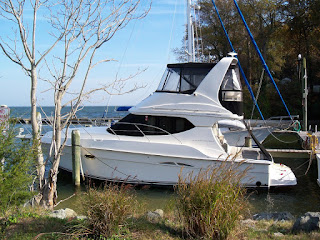 This what I found at the boat today on our walk to the beach today.


The friend responded to the Calvert County Sheriff’s Office to report Fell as missing. The harbormaster checked the surveillance camera footage from the pier where Fell’s boat is located, which showed Fell falling off the dock, the release states.

Fell’s body was transported to the Office of the Chief Medical Examiner in Baltimore, where an autopsy will be performed.

This is a real fear around docks. It only takes a little slip wind up in the water with a head injury or worse.
Posted by Fritz at 7:24 PM