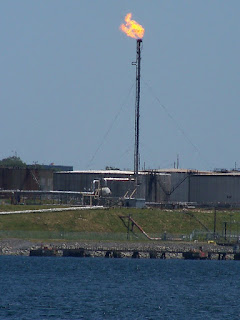 With two months left in President Barack Obama’s term, his administration issued a rule Tuesday intended to clamp down on oil companies that burn off natural gas on public lands.

The new rule seeks to reduce waste and harmful methane emissions as part of a strategy to address climate change. But a new Republican administration under President-elect Donald Trump could reconsider the rule or even scrap it, although any effort to do so would likely take months.
. . .
Energy companies frequently “flare” or burn off vast supplies of natural gas at drilling sites because it makes less money than oil. A government report said an estimated 40 percent of the gas being flared or vented could be captured economically and sold. 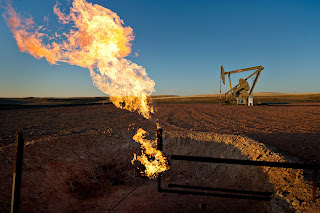 I'm quite confident that if it could be recovered and sold, the companies would be doing it, government report not withstanding. They're not fools throwing away money deliberately.


Interior Secretary Sally Jewell said the new rule updates 30-year-old drilling regulations to meet modern standards and ensure that natural gas is used to power the economy — not wasted by being burned into the atmosphere. The rule is set to take effect in mid-January — days before Mr. Obama leaves office.

It's always amusing how administrations find the need for onerous regulations in the last two months before the change over to new administration, particularly one from the opposing party, after having let the issue slide for 7 years and 10 months.


“This rule to prevent waste of our nation’s natural gas supplies is good government, plain and simple,” Ms. Jewell said in a statement. “We are proving that we can cut harmful methane emissions that contribute to climate change, while putting in place standards that make good economic sense for the nation.”

Congressional Republicans vowed to overturn the rule, calling it a “midnight regulation” that will drive away jobs from federal land in the West.

House Majority Leader Kevin McCarthy said in a letter to Mr. Obama that lawmakers will review all regulations issued in the next two months and overturn them if appropriate.

If you're really worried about global warming, you should be in favor of the companies flaring off the methane that's too expensive to capture. Methane is a much stronger greenhouse gas than carbon dioxide, and converting it to CO2 prematurely is preemptively much better that releasing it intact. While I'm all for catching this gas and using it, this rule is not primarily about saving the planet, it's about attacking America's energy providers.

And, if Washington is so intent on saving the lost gas, maybe they should look a closer to home as well:  Researchers find nearly 6,000 natural gas leaks in District’s aging pipe system
Posted by Fritz at 9:37 AM