. . . today, except shoes that smell like fish. I suggest you go check out Wombat-socho's "In The Mailbox: 11.15.16", Maggie's Farm's "Wednesday morning links", and today's post at Larwyn's Linx: Democrat Luis Gutierrez Threatens War If Trump Enforces Immigration Law. Stacy McCain also has a post reminding us that "Yes, @kmo75947, Feminists Do Hate Men":


As of 2016, according to the U.S. Department of Education, there are about 12.4 million female students enrolled in American colleges and universities, compared to about 9.1 million male students. In order to achieve “gender equity” in college enrollment, we must either (a) do something about the anti-male discrimination in our nation’s school systems, or else (b) expel about 3.3 million college girls. 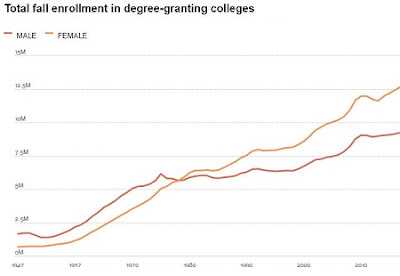 After all, don’t feminists believe that the absence of “gender equity” (e.g., the disparity between men’s and women’s average annual income) provesthat women are victims of sexist discrimination? By this logic, then, isn’t the shortage of male students on U.S. campuses proof that universities are discriminating against men?

If, as Lauren Barnes told Ms. Mo, feminism’s goal is “to give equality to everyone,” why aren’t feminists protesting against the inequality in higher education? And the answer is, because feminists hate men.