With the election of Donald Trump, a staunch opponent of Obamacare as it stands now, as the next President of the United States, what's to become of the law (and this continuing thread)? Obamacare continues it's long spiral into failure as No surge of new customers in early Obamacare enrollment figures

Reuters poll: Voters want action on healthcare first. As always, such polls do more to conceal the truth than to reveal it. The fact is that no one is happy in the current system. Democrats think it's not all inclusive enough, and long for socialized medicine under the name of "single payer" while Republicans hope to go back to a more individualistic system, where people actually pay for the level of health care that they determine they need. You can't make both sides happy.

Why Trump’s Idea of Amending Obamacare Simply Can’t Work. Trump wants the repeal the parts that people don't like (e.g. the mandate), while keeping the popular points (coverage  by parents until 26, no pre-existing condition issues). Unfortunately, the first was designed to pay for the second, which didn't work out well to begin with, but repealing it makes the problem worse. The problem is that the "few plans to fit all" approach of the democrats doesn't work well in the real world with broad spectrum of people's needs and wishes.

Republicans may be mulling pre-inaugural repeal of Obamacare.


The plan could entail using a budgetary tool known as reconciliation, which allows legislation to pass the Senate with just 51 votes instead of the typical 60 votes. Senate Republicans earlier this year voted to repeal most of the healthcare law using reconciliation, but it was vetoed by President Obama.

"We can go ahead and repeal Obamacare as we've done before … but with the likelihood that this time President Trump would actually sign it into law." Cornyn said.

Legislate in haste, repent in leisure. Despite Republican pledges, 'repealing Obamacare' will be almost impossible — but it could be vandalized. Probably true, but the democratic author sees any mucking with the "vision" of Obamacare is vandalism. Obamacare supporters vow ‘total war’ to defend the law. OK then, nuke 'em, if that's what it takes.  Will Senate Republicans ONCE AGAIN screw America on Obamacare?  Probably. It's what they are, it's what they do.

How to Get Liberals to Demand Repeal of Obamacare 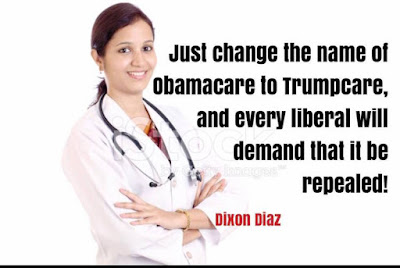