A Special Kind of Trash Collecter

From the WaPo, an article on the boats that pick up trash on the the Potomac and Anacostia Rivers: Roiling on the river: This boat prowls the waters, picking up floating logs and other stuff.

There was the time that Jeffrey Peacock came upon a refrigerator bobbing, door closed, in the Potomac River and knew that it fell to his team to scoop it up and see what was inside.

And the big duffel bag, remembered Randy Coats. It floated in an odd way, round and bulbous on one end.

“I didn’t want to open it,” said Jeffrey of the refrigerator.

“What are you?” wondered Randy of the round thing in the duffel bag.

The refrigerator turned out to be full of paint cans, not a legless, armless, headless torso. The duffel bag held clothes and a soccer ball, not torso-less arms, legs and head.

The BD 5, operated by the Army Corps of Engineers to clear debris from the Potomac and Anacostia, has a mesh basket at the front to pick up floating logs and other hazards to navigation. 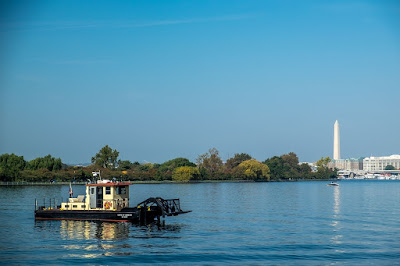 Which is how it usually pans out as the little boat called BD 5 chugs along the Potomac and Anacostia rivers and the Washington Channel.

“BD” stands for Baltimore Debris. The boat is operated by the Army Corps of Engineers, the federal agency responsible for keeping the channel navigable. That means occasional dredging of the river bottom; it also means prowling for floating hazards. The boat is called Baltimore Debris because it falls under the engineer corps’ Baltimore District.

These must be successors to the boats I used to see cleaning up trash on the Anacostia back when I used to sample there now and then. Those boats had a pair of arms that swept floating debris onto a loading ramp that carried it up onto a towed barge that collected the trash. I wish I'd taken some pictures. 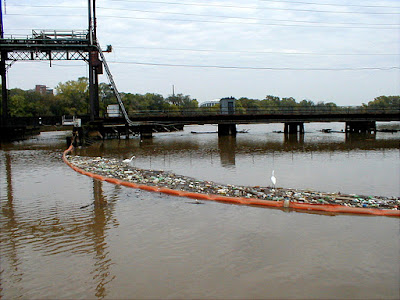