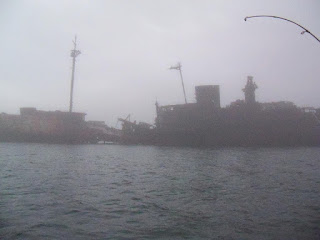 I got the call last night. Walleye Pete had a charter cancel due to impending weather, and invited Dan Crane and I to go hook and line commercial fishing. It was very foggy in the morning, and in fact, into the early afternoon. It was pretty eerie going across the Bay to the Target Ship and Middle Grounds in dense fog, by radar, dodging a freighter that we never saw, but heard, and felt it's wake. 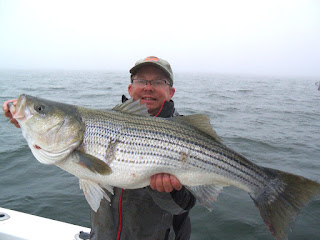 Decent fishing on the Middle Grounds for a while. Everyone got at least one 30 inch fish, and Pete got this 38 inch monster that had to go back, as it was over the maximum size for commercial fish. He only cursed a little. 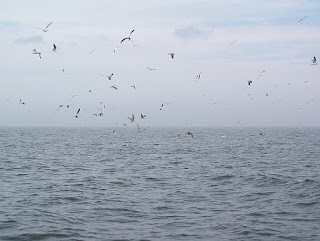 Later we wandered back across to the western side at the mouth of the Potomac, looking for birds and fish. We found them, at first by ear; we could hear the birds farther away than we could see them thanks to the fog. Fishing was good, but not great, but many of the fish were big. My biggest, 35 and a fraction, came after the tip of my pole broke, making the fight a bit more challenging. 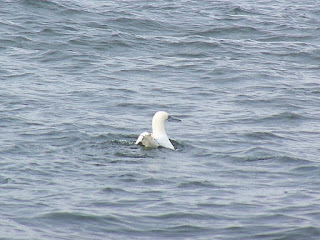 Among the birds were Northern Gannets, a diving fisher, with stiff, bright white wings with black tips, and a blue bill. They often dive in waves, a so-called gannet storm. We saw many gannets, and one small storm.