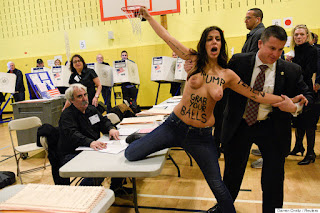 Two Femen Protestors took off their shirts and protested Donald Trump at a polling station in Manhattan.

Voters who were at a certain Manhattan polling place this morning reported nothing unusual about their experience.

The lines moved along quickly, the volunteers were helpful and friendly, and the naked women were yelling loud enough for everyone to hear.

Video that surfaced from this morning's voting at 233 E. 56th street shows two women, naked from the waist up, angrily shouting anti-Trump slogans—at the same polling station Trump will be voting at later today. 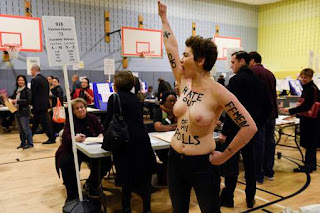 But one of the protesters got the last word by shouting somewhat nonsensically:


Shouting and abusive language is also considered intimidation, according to the Brennan Center for Justice.

Wombat-socho has "Rule 5 Monday: Happy Fun Victory Week" up and running at The Other McCain.