What is Best In Life?

The online Left has spent the past 24 hours lashing itself into a frothing frenzy of Fear and Loathing such as I haven’t seen in years. You’d have to go back to the Bush/Gore 2000 Florida meltdown to find more rage, paranoia and partisan hatred than we’ve seen since it became apparent Tuesday night that Hillary Clinton was headed to defeat.
Stipulate that most feminists are at least half-crazy on any day of the year, but since Tuesday night, they’ve all taken complete leave of their senses, spiraling off into the outer stratosphere of insanity.


How do I tell my daughter that
America elected a racist, sexist bully?

That’s the headline on Jessica Valenti’s column today, and the only proper answer is, “The same way you tell your daughter she would have had a baby sister if you hadn’t gotten an abortion.” (Her abortions are among of the Proud Feminist Moments™ in Valenti’s new memoir, along with her revelations about spending two years on a cocaine spree.)

The Guardian did a round-up of feminist opinion Wednesday in which we learned that “a terminally diseased system of male supremacy [is] in a battle to the death with women” (Robin Morgan), America “is racist, xenophobic, fearful and ignorant” and also “hates women” (Kate Harding), and that Hillary Clinton was defeated by “hate, fear, xenophobia and primitive gut nationalism” (Polly Toynbee). This is paranoid conspiracy-theory gibberish. They might as well have blamed the Freemasons, the Rosicrucians and the CIA while they were at it. 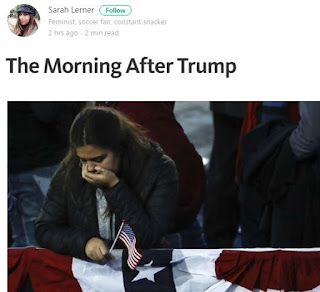 Our country’s reaction to the most qualified (female) candidate to ever run for President was to reject her outright in favor of an absolutely unqualified and hateful white man. . . .
Trump (and a Republican-controlled Congress) is a mandate on blatant hatred toward every person that isn’t a cisgender, heterosexual, able-bodied white man. We are literally scared for our lives.

Literally, I do not think that word means what you think it means.

And who could forget Rachel Maddow's teary eyed summary of the election results?


This might be the best thing ever. 😆😆😆 #NotMyPresident pic.twitter.com/geHYta7WMy
— Paul Joseph Watson (@PrisonPlanet) November 9, 2016


Which brings us back around to the entry question, What is best in life (today, at least)?