Trump Lookalike Seems To Be Having Fun 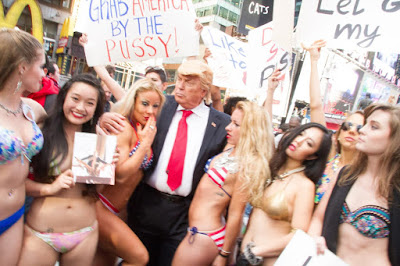 Alison Jackson actually makes a decent living as an artist so you must give her some deference to rank commercialism. If you're going to spend dollars doctoring up a Trump lookalike and a reasonable set, you're not going to satirically homage Trump giving a speech on failed trade agreements. It's going to be Trump banging chicks in the Oval Office.

Jackson's celebrity commentary Trump work is lewd and lascivious and reminds me of the primary reasons I ever considered voting for Trump. Tons of Melania in skin tight dresses and the old man banging more than chubby Brentwood interns on the Resolute desk. Bring Mira Lago to the White House. Maybe a couple addiitonal black people for show.

See more at the link, and here, too. I have to give her credit, the lookalike is much better than Alex Baldwin.