It looks like the first big fight between the defeated Democrats and the victorious Donald Trump is shaping up too be the confirmation of Sen Jeff Sessions of Alabama as Attorney General. Although the ostensible reason is a few comments Sessions has made in the distant past that will be construed as racist, despite his having prosecuted the KKK in Alabama. On the Sunday shows yesterday, Sen Schumer all but promised to bring all his available weapons to the fight. Byron York explores the real reason: Attorney General Jeff Sessions is Democrats' nightmare: 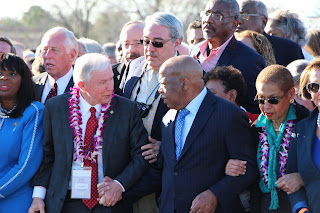 Here's why the effort to stop Sessions is likely to intensify as his confirmation hearings near. Sessions is the Senate's highest-profile, most determined, and most knowledgeable opponent of comprehensive immigration reform. Democrats are particularly anxious about immigration because of the unusually tenuous nature of President Obama's policies on the issue. Those policies can be undone unilaterally, by the new president in some cases, and by the attorney general and head of homeland security in other cases. There's no need for congressional action — and no way for House or Senate Democrats to slow or stop it.

There are extensive, and in some cases, strict immigration laws on the books, passed by bipartisan majorities of Congress. Obama wanted Congress to change those laws. Congress declined. So Obama stopped enforcing provisions of the law that he did not like. A new administration could simply resume enforcement of the law — a move that by itself would bring a huge change to immigration practices in the United States. No congressional approval needed.

Any nominee of Trump's could take on that role, but Sessions is the one with the best established record.
Posted by Fritz at 2:22 PM