Dear God, what awful choices she has made in her life! Her personality was warped by insecurity, a problem made worse by the way her parents burdened her with their own ambitions and, of course, there was New York City itself.... The working-class neighborhood where Jessica Valenti grew up was frequented by hookers and their customers, and when she traveled to school via the subway, she encountered the notorious “flashers” and “mashers” (exhibitionists and frotteurs) who have menaced the city’s public-transportation system for decades. Ms. Valenti doesn’t seem to understand this as a uniquely urban hazard....
Many genuinely despicable behaviors are commonplace in big cities, including violent crime, drug abuse and sexual hedonism. Ms. Valenti was a practitioner of the latter two vices from an early age, but goes to some length to avoid admitting that her behavior was wrong. She recounts her use of marijuana, ecstasy (MDMA) and cocaine as if being a dopehead was an ordinary aspect of life, the same way she discusses her drunkenness and all the various “hook-ups” and “relationships” in which she engaged from the time she lost her virginity as a 14-year-old freshman at Stuyvesant until 2009 when, at age 30, she married a Harvard boy five years younger than her. What emerges from the pages of Sex Object, discernible to any thinking adult, is the tale of what happens to girls growing up in a culture devoid of morality. . .

McCain is amazed that a professor would not take pains to hide her drug taking from students. There's more cocaine later, including in what is my favorite of McCain's sentences (paraphrasing her text):


Yeah, she already had a master’s degree in Women’s Studies from Rutgers (2002) and was working for NOW, but she was drunk when she got to this bar, met a broad-shouldered 6-foot-3 guy, showed him her panties and when they got back to her place at 4 a.m., cocaine “seemed like a decent idea.”

I'm glad McCain read that so I don't have to. It sounds like it's mostly descriptions of sexual encounters, and that's not the kind of writing that's ever likely to be much good, and it's really unlikely to be good if it's written not for the sake of sex but to make political points. It doesn't sound from McCain's discussion as though the sex stories support the the proposition that men are misogynists or whatever Valenti's form of feminism propounds. 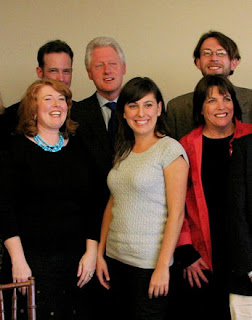 Althouse goes on to tell the back story of Jessica Valenti's boobs: Let's keep talking about breasts and Let's take a closer look at those breasts (right). She does seem rather proud of them, and rightly so.

Now, I'm with Althouse in that I can't bear to do the deep dive into feminism the way that Stacy does. But like the scientists that are studying AIDS and cancer in hopes of finding a cure, I don't need all the details to wish them well. Feminism (with the capital F) is a disease on the body politic, a means the left uses to divide men and women and try to pull women into the leftist orbit. As Feminist Roxane Gay Declares: ‘We Have to Get White Women in Order’.


“We have to get white women in order,” Roxane Gay said Friday at the Facing Race conference in Atlanta. “Until women are less invested in what white men think, we aren’t dismantling patriarchy.”
. . .
Open expressions of hatred toward white women have become common among Democrat activists since the election because of exit polls showing that a majority (53%) of white women voted for Trump. Ms. Gay’s anti-white remarks at the Atlanta conference were quoted on Twitter by former Ebony magazine senior editor Jamilah Lemieux, who since the election has changed her Twitter handle to “Atone, White Women!”

It seems to have rebounded against the feminist left in the last election. Women aren't as stupid as they hope.

Wombat-socho has "Rule 5 Sunday: Getting Ready for Thanksgiving" and "FMJRA 2.0: The Stars And Stripes Forever" up and running at The Other McCain.
Posted by Fritz at 9:25 AM