. . . an Ohio State University student, and Somali immigrant, ran his car into a crowd of students, got out of the car and attacked more students with a scimitar, and was killed by a campus policeman. Nine people are reported to be in the hospital. 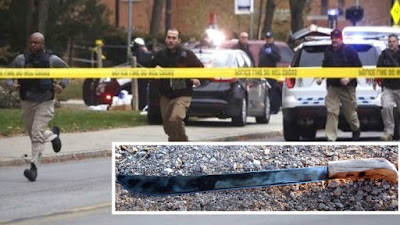 His motives are "unknown." However:


“The Lantern” — OSU’s campus newspaper — ran an interview with Artan just a few months ago, in which he criticized the school for not having Muslim prayer rooms on campus.

“I wanted to pray in the open, but I was kind of scared with everything going on in the media,” he stated. “I’m a Muslim, it’s not what the media portrays me to be.”

Deeply saddened by the senseless act of gun violence at Ohio State this morning. Praying for the injured and the entire Buckeye community
— Senator Tim Kaine (@timkaine) November 28, 2016