Trump Persuades 100 Women to Take Off Their Clothes in Public 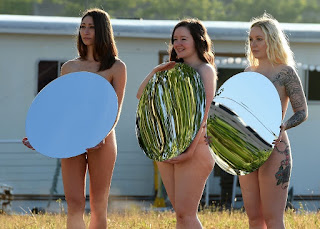 And it wasn't even a beauty pageant. 100 nude women pose in Cleveland, "reflecting on Trump"


American photographer Spencer Tunick merged nudity and politics in a dramatic way Sunday in his latest work, posing 100 unclothed women for a shoot in sight of the Republican National Convention.

Tunick's large-scale art installation, "Everything She Says Means Everything," featured women of all shapes, colors and sizes, holding up mirrors toward the arena where Republicans this week are set to formally name billionaire Donald Trump as their presidential nominee.

"Everything She Says Means Everything," What does that even mean?


The artist is well known for his sometimes startling images of nude people. The women stripped down to their bare and often tattooed skin early Sunday and were seen snapping selfies with each other.

Tunick's website said that the mirrors reflected "the knowledge and wisdom of progressive women and the concept of 'Mother Nature'... onto the convention center, cityscape and horizon of Cleveland."

Why is it that the first resort of women trying to make a point is to take off all or part of their clothes. Don't they have mouths? And then they'll complain that men sexualize everything. I think the last time this actually worked was for Lady Godiva (and modern historians doubt that it happened at all). 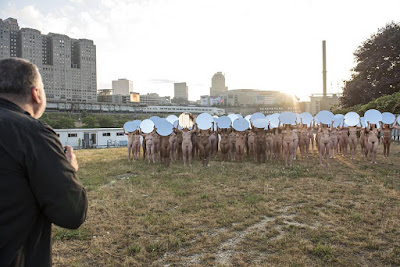 Not up to Femen standards at all.