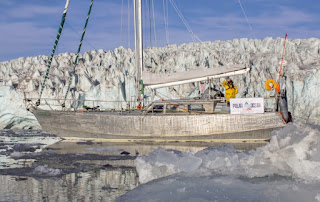 And sometimes twice, once in the Arctic and once in the Antarctic: The obligatory global warming exploration ship stopped by sea ice thread


The jokes pretty much write themselves since there doesn’t seem to be any imminent danger to life and limb. The ship named Polar Ocean Challenge is in the process of demonstrating the real world effects of global warming by navigating the northeast and northwest passages above Canada, Europe and Asia. It’s a big project to undertake, particularly when you consider the lengthy history of human exploration which once sought that mythical northwest passage from Europe to India. (Sadly, quite a few people died in the attempt.)

But now that global warming has cleared the path, the dream can finally be realized. Except for one small problem… the sea ice is still there and it stopped them in their tracks. (Daily Caller)


A group of adventurers, sailors, pilots and climate scientists that recently started a journey around the North Pole in an effort to show the lack of ice, has been blocked from further travels by ice.
The Polar Ocean Challenge is taking a two month journey that will see them go from Bristol, Alaska, to Norway, then to Russia through the North East passage, back to Alaska through the North West passage, to Greenland and then ultimately back to Bristol. Their objective, as laid out by their website, was to demonstrate “that the Arctic sea ice coverage shrinks back so far now in the summer months that sea that was permanently locked up now can allow passage through.”
There has been one small hiccup thus-far though: they are currently stuck in Murmansk, Russia because there is too much ice blocking the North East passage the team said didn’t exist in summer months, according to Real Climate Science.

Curiously enough, this isn’t the first time this has happened. The Polar Ocean Challenge was trying it in the Arctic because this is when it’s summer in the northern hemisphere. But back in January of 2014, 52 people had to be rescued from a ship stuck in the Antarctic ice on the other end of the globe. You have to scroll all the way to the bottom of that CNN article to discover that Chris Turney, the expedition leader, is also a climate scientist. On his personal website, however, the professor apparently went into more detail. CNN simply summed it up by saying, “Turney’s expedition to gauge the effects of climate change on the region began on November 27. ”

Apparently, climate scientists are not experts on the movements of sea ice.
Posted by Fritz at 8:13 PM