Is Bay Improvement in the Air?

The Chesapeake Bay's water quality has improved significantly. We may now know why.

Researchers with the University of Maryland Center for Environmental Science have found a surprising explanation for the improved water quality in the Chesapeake Bay: cleaner air.

Professor Keith Eshleman (ESH'-el-men) in the center's Frostburg office said in a statement Tuesday that his team found nearly universal improvement in water quality since 1986 across the Upper Potomac River Basin. The area includes parts of Maryland, Pennsylvania, Virginia, West Virginia and the District of Columbia.

Eshleman says the improvement is mainly due to reduced levels of atmospheric nitrogen dioxides following implementation of the Clean Air Act in 1990. The law limited emissions from coal-fired power plants.

Eshleman says the reductions lowered the amount of excess nitrogen falling across the region and causing algae blooms in waterways. 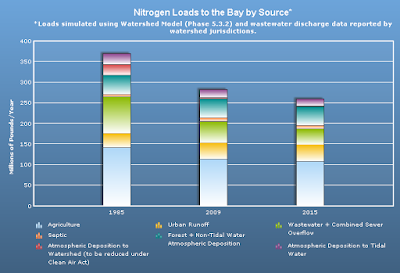 The claim seems pretty dubious. Direct deposition to the tidal waters is small, and even halving it is not a big contributor. More importantly, forest and non-tidal water atmospheric deposition has actually grown slightly. It looks to me like agriculture and waste water and combined sewage overflow have contributed to the majority of the decrease in nitrogen pollution into the Bay.
Posted by Fritz at 12:32 PM