US Coast Guard vs. Vikings 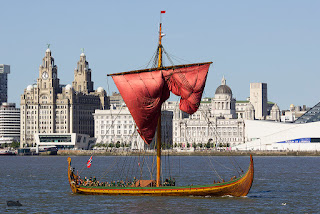 So far, the bureaucrats are winning: World's Largest Viking Ship Might be Defeated by U.S. Coast Guard

The Draken Harald Hårfagre, which began sailing in 2012, is 115 feet from stem to stern, 26-feet wide, has a 2,798-square foot silk sail, and a Douglas fir mast 79-feet tall. Built with over 10,000 nails and detailed ornamentation, the Harald Hårfagre, named after the first king of Norway, travels the world reminding everyone how epic the ancient Vikings were. It was funded by Sigurd Aase, a Norwegian oil and gas tycoon. 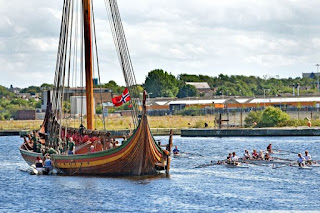 However, Aase's ship has hit an unexpected dilemma in America. At first glance, the Tall Ships Duluth festival would be a perfect fit for the Harald Hårfagre. A "rare chance to catch a glimpse, step aboard, and even set sail on some of the grandest ships of yore," Tall Ships celebrates nautical traditions in the Great Lakes partially located on the Canadian-American border. When the Hårfagre crossed the American border for the festival it was approached by the Coast Guard, which informed the team that it needed a ship's pilot. The ship, of course, had a captain, but there's a large difference a captain and a pilot. The Coast Guard says the Hårfagre was notified of the need for a pilot last February. 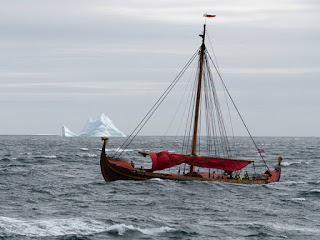 I was on an oceanographic ship a few times when pilot was needed. It's interesting how they get on board a moving ship, and take over the ship. Captains don't like it, though.

The question comes down to if the Harald Hårfagre is engaged in commerce. Because the Hårfagre charges admission and takes tickets, the Coast Guard has ruled that it's a business ship and requires a pilot. Sarah Blank, spokeswoman for the Hårfagre, disagrees. "For us to have tickets, admissions or appearances, it's not a commercial interest," she told MLive. "It's because otherwise, we are not able to fund our expedition at all." A statement released on the ship's website refers to Hårfagre as a "non-profit sail training vessel."

Charities in the United States normally get around these perky rules by calling their fees "donations". Walk up to the  door of the Metropolitan Art Museum in New York, and ask. They'll let you in. It's too bad the Vikings need a good lawyer.


A ship's pilot is a nice profession, with pilots typically charging $400 per hour. It's estimated that the Harald Hårfagre would need $400,000 to cover its entire time in the Great Lakes. "The fees are just not possible for a project like Draken Harald Hårfagre to pay," Aase, the chariman of Crudecorp, said in a statement. Although it is currently docked in Bay City, Michigan, if nothing changes the ship plans to turn around and head back to Norway.

Of course, the Viking ships were designed for shallow waters, and to be beached during landings so a pilot should be completely unnecessary. I also assume that somewhere on board is a GPS and a modern depth finder, which would help even more.
Posted by Fritz at 8:21 AM