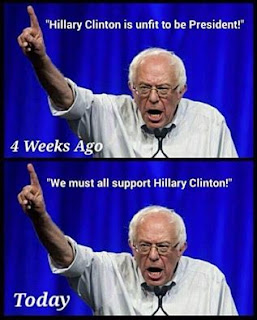 Well, last night, the Democrats indicted nominated Hillary Clinton, felon extraordinaire, to be their representative candidate for the President of the United States. No wall around the country, but they need one around the DNC podium, while one Delegate slams DNC for not donating leftover food to poor. The morning started out fine, with Bernie, Hillary Fans Yelling At Each Other at Texas Delegation Breakfast. By the second day, they managed to find some American Flags to display, instead of the  Soviet and Palestinian Flags that they keep on hand, while avoiding all talk of ISIS and terrorism. Dead thugs mothers joined the festivities,  celebrating Cop Killin' Night at the Democrat National Coven,  the DNC violated immigration law by knowingly abetting an illegal immigrant and Tim Kaine promises bill to legalize illegal immigrants in ‘first 100 days’. Finally, Bernie fell totally in line, kissed her ass, and donated all his votes to her to make it unanimous. Not all Bernie Bros were pleased: Angry Bernie Sanders Supporters Protest Hillary Clinton’s Nomination

In the case of the leaked DNC emails, as usual, when the leak is about a Republican, the source of the leak doesn't concern anyone, but the contents do, and when a leak is about a Democrat, the contents of the leaks are glossed over so they can quickly find out who is the scoundrel that leaked the damaging information. This time the, speculation has mostly pegged Russia's Putin as the culprit, putting him beyond the reach of petty democratic DAs. The Kremlin laughs off the suggestion that they did it, which of course, only makes it seem more likely. Remember all those Times Liberals Mocked Mitt Romney For Warning About Russia? Pat Buchanan wants to know if Putin will win a Pulitzer like the Watergate reporters. Politico offers a new explanation for Putin's interference in our elections, our interference in his at the hands of the Clinton State Dept. What comes around, goes around. One thing that the Democrats have not been able to do is deny that they wrote all the damning emails, and then didn't protect them.

A Reminder: NYT: Clintons Failed to Disclose $2.35M Donation from Russian-Owned Uranium Corp and launder their foreign money through a Canadian charity set up by Clinton.com. Clinton hiring DWS: 'Thank you' or damage control? She does know where a lot of bodies are buried; so many in fact, that they are sort of popping up all over.

The 4 Most Damaging Emails From the DNC WikiLeaks Dump Democrats Fear: Are more leaks to come? I certainly hope so.  Clinton campaign braces for more DNC leaks  New revelations: DNC Staffers Annoyed At Having To Commemorate The Holocaust. Yeah, screw the Jews, they'll keep voting for you anyway.  Leaked Emails Show How Hillary Lied To States And Robbed Them Blind. But it was only fellow democrats, so it's no skin off my nose. Hillary On DNC Emails: “Again, I don’t know anything.” Of course; selective ignorance is an important criterion for being leader of the free world Democratic party. Eric Wemple of the WaPo thinks we should ignore how Ken Vogel of Politico colluded with the DNC. I wonder why; what's in it for him? Piers Morgan shocks everyone, drops major TRUTH BOMB about Hillary…


“If Hillary’s dastardly DNC disciples will do this to one of their own like Bernie Sanders, what the hell will they do to everyone else?”


If Trump wins the presidency, there will be a lot of reasons, and a lot of blame to go around. But one factor, and some-much deserved blame, will be the decision to anoint Clinton as the candidate long before the primary had even started. I don’t blame Clinton for this, because upwardly mobile politicians like her all think they have what it takes to become president, and they do their utmost to get themselves into that coveted job. But there were a lot of people who ought to have known better. Either they didn't, or they didn’t act on that knowledge. If Clinton doesn’t manage to pull this out, that decision will haunt them for years to come.

How Hillary Clinton dangerously misjudged our political moment. Because she's not all that savvy. Poll: Clinton's image at lowest level in 24 years. The more you see her, the more there is to dislike. CHANGE! Nate Silver Has Trump Ahead Now. I prefer to see this as Hillary Behind Now!
“IF WE JUST KEEP REINTRODUCING HER, EVENTUALLY SHE’LL BE LIKEABLE ENOUGH!” Democratic National Convention: Supporters hope to reintroduce Clinton to skeptical voters. The Newbusters identify a Baghdad Bob Moment asMSNBC Claims DNC Chair 'Receives Cheers'...As She's Booed Relentlessly. No doubt there were some cheers; there's supposed to be some at your coronation. TBS Apologies for Hillary Clinton Hyena Video 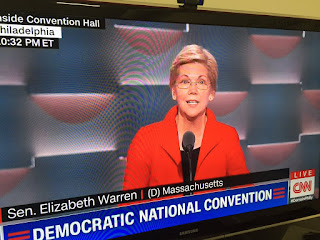 At least the hyenas sound authentic. WaPo Outs Bernie as a self-plagiarist? I mean, who cares? Bernie is so yesterday. Anthony Weiner Gets Hostile When Asked About Huma's Security Clearance: Well, the guy is kind of a dick. Warren speaks against "email" background: ‘Ooops!’ Notice anything special about this DNC backdrop yesterday? (It’s kinda perfect.). A gentle prod?

I won't detail the contents of Wombat-sochos "In The Mailbox: 07.26.15", "Larwyn's Linx: Hillary On DNC Emails: “Again, I don’t know anything.”", "Larwyn's Linx: Democrat delegate admits 'gun control' is code for wanting to ban all gun" or even Maggies Farm "Tuesday morning links", but suffice it to say, there's plenty of there there.
Posted by Fritz at 9:35 AM