Hillary Clinton has disqualified herself from the presidency.

No matter what your tribal politics may be, after FBI Director James Comey's withering testimony before Congress on Thursday over her email scandal, there really is no way around it, is there?

She disqualified herself by her own hand.

Mrs. Clinton, former secretary of state, has already proved she can't be trusted with national secrets. She put those secrets at risk by using a private email server kept in her basement, against security protocol.

That server was likely hacked by foreign intelligence. She failed, miserably, in protecting the secrets of her nation.

So for all this she should be rewarded and promoted and handed the near absolute power of an imperial presidency?

And, she lied to the American people. That much is clear. She lied about what she did and how and why. There are tapes of it floating all about on the internet, lies to reporters, lies in those rare public appearances where she actually takes questions.

Comey also confirmed that she allowed her lawyers — who didn't have security clearance — to view and assess her vast store of incriminating emails.

Clinton did all this not in the national interest, but in the Hillary interest. . .

I know that's a long quote, but that's not the whole thing. Go to the link and watch the video. The Case for Donald Trump - The alternative is President Hillary Rodham Clinton. Pretty much my position.

And from the "it ain't over 'til the fat lady squeals" department, FBI to start handing over deleted Clinton emails to State on Friday. As Instapundit notes:


These were “deleted” emails. Congressional investigators will demand State provide them with copies. For good reason– loose lips do sink ships.

No need to speculate about what's in them. Soon enough we'll know. WSJ: Clinton’s Information Lockdown - The private email server was only semiprivate: Putin likely has everything. I would be shocked if Russia, Iran, China, Israel and Anonymous didn't have the complete set.


“LAW AND ORDER” OR “THE RULE OF LAW?” DO HILLARY OR THE DONALD KNOW? That’s the question posed today by The Daily Gouge in assessing the reactions of Hillary Clinton and Donald Trump to the ambush assassination of three Baton Rouge police officers Saturday.

“No, Hillary, the only people turning their backs on anything are you and your former boss; and it’s the rule of law in America, both through your words and actions. And THAT, Donald, is what we need, not law and order. Rule by an impartial application of the law and order will naturally follow as surely as night does day; whether in the realm of violent crime, immigration or government email security.”

An amusing question from Techdirt:  Could Donald Trump Block Hillary Clinton's Campaign From Visiting His Website Via The CFAA? The CFAA (Computer Fraud and Abuse Act), is a typical piece of activist legislation, acted on in haste and repented in leisure.


A U.S. Office of Special Counsel report released Monday found that Housing and Urban Development Secretary Julián Castro violated the Hatch Act, which restricts the political activity of some federal employees, during an April interview with Yahoo News.

Castro's statements during the interview, according to a OSC news release, mixed his "personal political views with officials agency business despite his efforts to clarify that some answers were being given in his personal capacity." The department found he violated the act by "advocating for and against presidential candidates while giving a media interview in his official capacity on April 4, 2016," the report states.

The Hatch Act, passed in 1939, prohibits employees from using their official authority or influence to affect the outcome of an election, according to the report. The OSC submitted the report and Castro's response to President Barack Obama for "appropriate action."

Which only makes him a better fit for a theoretical Clinton administration. But never fear, the fix was in:


The OSC said it conducted an investigation after receiving a complaint about the interview but didn’t shed light on who noted Castro’s mistake.

Because Castro acknowledged the mistake, no additional action is expected.

At the RNC convention: Mother Of Benghazi Attack Victim: I Blame Hillary Clinton For The Death Of My Son, "She Deserves To Be In Stripes"

"Since then," she continued. "I have repeatedly asked Hillary Clinton to ask plaintiff may the real reason why my son is dead. I'm still waiting. Whenever I call the State Department, no one would speak to me because they say I am not a member of the immediate family..."

Chris Matthews: GOP 'ruined' evening by having 'that woman' speak on Benghazi


"I don't care what that woman up there, the mother, has felt," he continued. "Her emotions are her own. But for the country in choosing a leader, it's wrong to have someone get up there and tell a lie about Hillary Clinton. It's not true. It's logically not true. I think it's wrong that they ruined their evening with this."

Only two people know the truth of what was said between them, but only one of them is notorious for public, serial dishonesty.

And it's starting to wear on the public: The continuing political decline of Hillary Clinton


. . . it's hard to overstate just how bad Clinton's numbers are. And a new Washington Post-ABC News poll is the latest to suggest they just keep getting worse — so much so that they are in some ways about as bad as Trump's.

The poll shows 54 percent of all Americans have an unfavorable view of Clinton and 44 percent have a "strongly unfavorable" view of her. When you boil it down just to registered voters, those numbers tick up to 57 percent and 47 percent, respectively 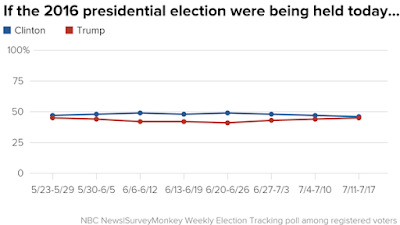