Over half of Americans believe that the FBI should have recommended charges against Clinton — 58 percent — and disapproval wasn’t evenly split down party lines. Nine in 10 Republicans said she should have been charged, and 3 in 10 Democrats and 6 in 10 independents also believed the agency made the wrong decision.

But whether the revelations from Comey’s statements changed many votes remains murky. According to a recent ABC News/Washington Post poll, 45 percent of Republicans say the FBI’s findings make no difference in their vote — likely meaning they would never have voted for Clinton anyway. A further 47 percent of voters says it makes them less likely to support her.

Among Democrats, only 1 in 10 said they were less likely to vote for her because of it. The rest said it either made no difference or strengthened their support for her.

But the issue caused a little more shift among independents. Although the majority of voters — 58 percent — said the issue won’t influence their choice, a full third said it made them less likely to support Clinton in November.

Why Can’t Hillary Stop Fudging the Truth? - Email-gate is only the latest instance in a 25-year habit of dissembling. Because the country can't stand the truth.

Now onto the DNC email leak, which are now boiling in the news. Leaked Emails Show DNC Officials Planned Anti-Trump Protests Does suggest mean the DNC encouraged and funded some the violent protests at Trump rallies. Does that make them conspirators in a violent crime? What would the press reaction be if the RNC pulled similar stunts at the DNC convention this week? On a lighter side, the DNC emails show casual racism as they refer to Hispanic outreach as "Taco Bowl Engagement". They also reveal extensive behind the scenes collusion with prominent journalists, but then, that was always obvious.  5 Biggest Scoops from the #DNCLeaks WikiLeak (with actual emails cited)


1) Chuck Todd of NBC is bossed around by DNC Chair Debra Wasserman.
2) Hillary has to pay people to support her.
3) Protests that the media cover are not real. The “protesters” are a bunch of interns.
4) The Washington Post hosts joint fundraisers with the DNC.
5) The Democratic primary was rigged.


Note Robby Mook neglects to name the “some experts” who tell him helping Trump was what motivated Russian hackers. He does yoke Trump to Vladimir Putin. But Hillary’s the one who re-set relations, didn’t she, Robby? Seems Robby Mook has determined Russian motives but for Jim Comey and the FBI Hillary’s motives remained opaque. Poor security may have permitted the DNC hack, Robby — like, gross negligence. Will you overlook your staff’s gross communication security negligence as blithely as Jim Comey ignored Hillary’s criminal negligence? Think about it. Mook’s smear of Trump all but admits motivated American enemies hacked Hillary’s server and obtained classified information.

Really, the DNC shouldn't spend a lot of time publicizing the Russian governments ability to hack unprotected servers. It's not like the Clinton campaign doesn't have it's own links to the Russians. Panama Papers Reveal Clinton’s Kremlin Connection and REWIND: FBI Shuts Down Russian Spy Ring for Getting Too Cozy with Hillary Clinton. FLASHBACK: Cash Flowed to Clinton Foundation Amid Russian Uranium Deal.


Rep. Debbie Wasserman Schultz, chairwoman of the Democratic National Committee, announced her decision to resign Sunday amid controversy over leaked emails that exposed the DNC's underhanded efforts to stifle Sen. Bernie Sanders' popularity during the primary.

Her resignation will become effective at the end of the convention, where she had already been stripped of her prime-time speaking role as calls for her to step down grew louder over the weekend.

Wasserman Schultz cited her desire to focus on boosting Hillary Clinton in Florida, where she is running for re-election, in a statement announcing her decision to step down just one day before the Democratic convention begins here in Philadelphia.

"Going forward, the best way for me to accomplish those goals is to step down as party chair at the end of this convention," she said. "As party chair, this week I will open and close the convention and I will address our delegates about the stakes involved in this election not only for Democrats, but for all Americans." 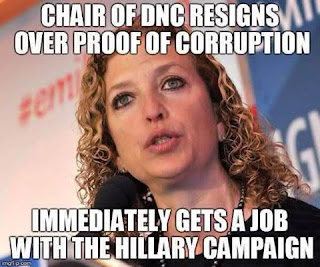 CNN suspends ties with presumed successor Brazile. Inside the scramble to oust Debbie Wasserman Schultz: Aides to President Barack Obama urged him to get rid of the troublesome DNC chair last fall. He passed, figuring she was Hillary Clinton’s problem to solve. But, failure is it's own reward in the Democratic party. Time to collect some of that good Clinton Cash: That Was Fast! Hillary Immediately Brings Disgraced DNC Chair Onto Her Campaign! and Wasserman Schultz to Have a New Role in Clinton Campaign Does this mean she'll go into competition with Huma Abedin, Cheryl Mills and Sid "the Shiv" Blumenthal for some of the tax free Clinton Foundation money?

But onto new subjects: CBS Morning News cast laughs after Hillary Clinton claims she can't be bought I think she meant to say she wasn't cheap. Obama's Kenyan born half-brother (an American citizen) explains why He's Voting for Donald Trump. The Daily Beast! lists What Hillary Clinton Got Wrong About The World and it's a long list, while the New York Times worries How Can Hillary Clinton Sell Herself to Voters Who Already Know Her? Jill Stein: “The scary things, the horrific things that Donald Trump says, Hillary Clinton has already done. Whether it’s massively deporting immigrants, whether it’s threatening nuclear warfare. …” while Hillary frets Republicans Have Created a ‘Hillary Standard’ which allows her to commit felonies at will.

Looking forward to this week at the DNC convention Michael Goodwin thinks Hillary risks being upstaged by rivals at her own convention and Insiders: Obama, Warren will outshine Clinton in Philly. As President Obama notes about Hillary Clinton: "There are better speech-makers" I think he means his teleprompter.
Posted by Fritz at 7:50 AM