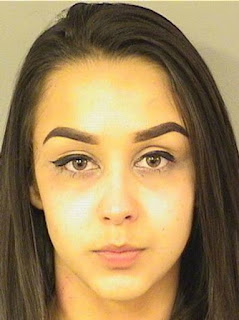 First, the Floron du Jour: Jilted Florida woman, 25, arrested wearing just a BRA after she 'intentionally crashed into ex-boyfriend's truck' because he dumped her right after they had sex

A Florida woman was arrested wearing just her bra after she allegedly crashed into her ex-boyfriend's truck as revenge for dumping her that day right after they had sex. Brianda Nayeli Ramirez, 25, has been charged with aggravated battery with a deadly weapon.

Ramirez intentionally hit the truck of her ex-boyfriend, Gabriel Sandoval, as he attempted to make a right turn and caused it to flip over, police said.

Sandoval, 38, told police that he and Ramirez began to argue in her apartment after he revealed he wanted to end their one-year relationship. Ramirez told police the couple had just finished having sex, and she threw on a bra and got into her silver Ford Fusion sedan so that she could follow Sandoval after he left her apartment.

She followed Sandoval to his aunt's house in Belle Glade, where a friend dropped him off so that he could pick up his own truck, according to WPBF. Ramirez told police that Sandoval refused to talk to her and drove off, but she continued to follow him. Sandoval's Ford truck flipped onto its roof in the middle of the road after he was hit. He later told police he only knew it was Ramirez who hit him after a witness mentioned a silver car. 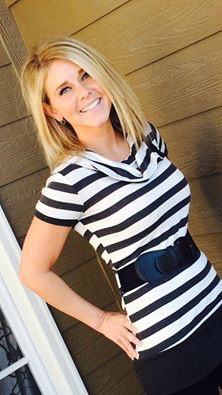 Never date a girl crazier than you, although it's not clear that's true in this case.  Meanwhile, above the state line. in Georgia: ‘Naked Twister’ mom gets probation for teen party


Rachel Lynn Lehnardt, 35, of Evans, pleaded guilty in late June to six counts of contributing to the delinquency of a minor, a misdemeanor, The Augusta Chronicle reported. Lehnardt, who was sentenced under the Georgia First Offender Act, also was fined $600.
...
When the 16-year-old texted her mom to ask if she could have friends over “to party,” Lehnardt replied, “come on, let’s party,” Lehnardt told her sponsor.

Lehnardt said she allowed the teens to smoke marijuana and drink alcohol in her home, according to the Columbia County Sheriff’s Office. The party-goers were allowed to play Twister while nude with Lehnardt, who left the game in order to have sex with an 18-year-old in a bathroom, a police report states. Lehnardt allegedly demonstrated various sex toys to the group, officials said. 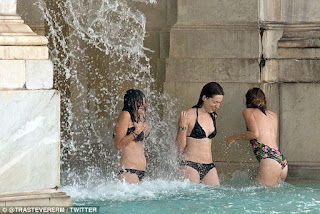 
Residents of Rome have reacted angrily after three women stripped down to their swimsuits to cool off in one of the city’s historic fountains.

The women, two of whom were wearing bikinis and the third in a one-piece swimsuit, are believed to have been tourists.

With temperatures hitting 90F (32C) the women thought the best way to cool off was to frolic under the jets of water in the 400-year old Fontana dell'Acqua Paola in Rome. 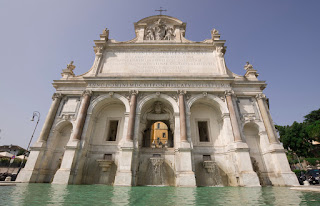 It dates back to 1612 and was featured in the opening scenes of Paolo Sorrentino's Oscar-winning film “The Great Beauty”.

The city’s extensive network of baroque fountains are cherished by Romans as some of the architectural highlights of the Italian capital.

It's a crime wave, I tell you. Women everywhere breaking all the rule, and exerting female privilege.