Yes, The Fix Was In for Clinton.com

I just can't thread a narrative out of all this stuff, so I'll just have to categorize it: 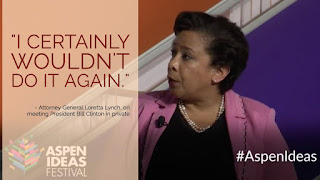 What Was The Real Reason Loretta Lynch Met With Bill Clinton At That Airport?


Enter the "chance meeting." Last week this looked like one of the most boneheaded moves ever made by an attorney general. It turned out to be an inspired bit of political theater. This enabled Bill Clinton to throw his old friend a lifeline. By meeting informally and in near secrecy with Clinton, Lynch suddenly had a reason to essentially recuse herself from the case by "accepting the FBI's recommendation."

The FBI now has a bigger problem. Lynch knows that there will be no prosecution and she has put the onus squarely on the FBI. By deferring to the FBI recommendation, Lynch has pinned the bull's-eye firmly on Comey and his senior leadership.

About that Clinton-Lynch accidental meeting - Anyone who gets close to the Clintons gets smeared. Just how many signals can the Clintons send to Lynch? - A horse head?

Clinton Off the Hook 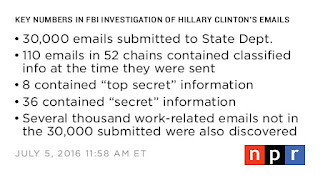 Hmmm: FBI Director to meet press, take off-camera questions at 11; Update: Matter will go to DoJ for “prosecutive decision”; Update: Will not recommend criminal charges; Update: Comey speech added No "malicious" intent, a standard not required by the law.

The Observer observes James Comey Sells Out: FBI Director's cowardly decision will go down as one of the government’s worst assaults on truth

The Day the Rule of Law Died. It was nice while it lasted. Maybe It's Time to Stop 'Thinking about Tomorrow'

Attorney General Lynch accepts FBI recommendation to clear Clinton of wrongdoing. Of course, she got the answer she directed. 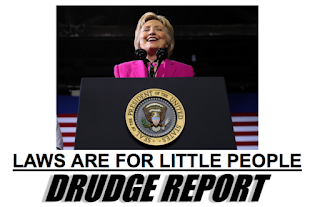 COULDN’T HAVE SAID IT BETTER MYSELF: (see right)

Look, here are Comey's remarks. The material needed to attack Hillary Clinton is all there. A prosecution would be very controversial AND it would cause many people to step back and allow it to take its course — with due process and the presumption of innocence. That route is closed off, but you have the evidence in front of you and can clearly see what she did:and can clearly see what she did. . .


Here’s the good news for Hillary Clinton: The FBI has recommended that no charges be brought following its investigation of the former secretary of state's private email server.

Here’s the bad news: Just about everything else. . .

Did Comey Actually Destroy Hillary Clinton by ‘Exonerating’ Her? Too much to hope for. Her media is already spinning it as her innocence. The Washington Post editorial board: Clinton was ‘extremely careless.’ That is not a crime, but she must do better in the future. Yes, actually it is a crime. She just won't be prosecuted for it. Hero Marine Nailed for Secret Email: What Did He Do That Hillary Didn’t?  Marine’s defense for disseminating classified information will cite Hillary Clinton’s case. Meet Bryan Nishimura, Found Guilty For "Removal And Retention Of Classified Materials"

Here is the FBI itself, less than a year ago, charging one Bryan H. Nishimura, 50, of Folsom, who pleaded guilty to "unauthorized removal and retention of classified materials" without malicious intent, in other words precisely what the FBI alleges Hillary did (h/t @DavidSirota):

Opposing view: I would indict Hillary Clinton. FBI Rewrites Federal Law to Let Hillary Off the Hook. Intent matters but it's not required. Rudy Giuliani: By Jim Comey’s own description, Hillary is guilty of a federal crime. That's what's so frustrating. Actually, in a way Comey is right; there's no way a Washington D.C. jury finds 12 honest people, so Hillary would walk in any event.

Hillary Clinton Did What to Decide What Official Government Records to Turn Over?


One thing Comey said in his murder of the American republic was that Hillary's lawyers didn't even read her emails to decide which to turn over, and which to delete.

Remember, it is The Fucking Law that any work-related email is an official government record which must be retained and turned over to the government for its permanent archives (and so people can FOIA it).

How did Hillary "comply" with this law?

Well, her lawyers did a keyword search of different keywords they imagined (they claim) would indicate a work-related emails.

Any email which did not pop up during these searches was simply deleted. Obliterated from existence.

Hypothetical: She searches for "Libya" as a term likely to disclose work-related emails. She does not search for "Lib," a common-enough truncation/abbreviation of Libya.

Emails that say "Lib" instead of "Libya" are then subject to mass-deletion.

And no, those emails are not all about yoga routines and grandchildren.

Incidentally. here are a coujple of keywords she would claim, from Jump Street, are "private" and "not work related" and therefore never search for at all:

This is not a procedure created to retain emails -- this is a protocol designed intentionally todelete as many emails as possible.

And he claims he could find no "intent" here, nor any attempt to obstruct justice.

State Department Refuses to Answer As to Whether Hillary and Her Minions Retain Their Security Clearances,  Welcome to post-America America.

The Aftermath - Media response. The media is finally starting to acknowledge the number of lies Hillary has promulgated:


It’s a bizarre argument anyway. Hey, we told you she’s only a liar and an incompetent, not a criminal! That could only be a winning argument in this cycle, and even that’s not a certainty at the moment.


"We're now reaching a point where there's mounting frustration that this is a project where the State Department may be running out the clock," said U.S. District Court Judge Richard J. Leon. The judge said he was considering imposing penalties on the agency if it failed to meet the next set of deadlines he orders. Leon wondered aloud at one point whether he might impose penalties for again failing to deliver records on time. He mused about "a fine on a daily basis" or "incarceration."

"I can't send the marshals, obviously, out to bring in the documents, at least they wouldn't know where to go, probably," Leon said.

Sen. D’Amato Drops Bomb: Hillary Allowed Russia to Take Ownership of US Uranium to Sell to Iran (Video), Well, the Republicans are the true enemies, everyone else is just a friend who hasn't bribed you yet for a favor.

Ah, a recurring question: why do so many people distrust and dislike Hillary Clinton?

Jeff Greenfield takes a stab at answering it. He goes through a long list of lies that she's uttered such as claiming that she and Bill were "dead broke" when his presidency was over or that she was paid $675,000 for three speeches for Goldman Sachs because "that's what they offered." And then there is her claim that those women who claim that they were victims of sexual assault should always be believed, except for those women, apparently, who made claims against her husband. There are so many lies, some that I hadn't even heard of such as Bill claiming during the Lewinsky scandal that he felt like a character in Darkness at Noon.


He’s talking about Rubashov—the loyal Bolshevik purged by the Stalinists in Arthur Koestler’s classic novel. That comparison would have been apt—if Monica Lewinsky had been making up a phony story designed to damage his presidency. (That’s the story, by the way, the White House was preparing to tell until that blue dress turned up.) How is it possible for Bill Clinton to have thought himself such a victim unless he saw himself as a force for good, fighting against forces of evil? (In his memoir, My Life, Clinton says at one point that the forces trying to remove him from office were the enemies of civil rights and other worthy causes.)

Right. Because disliking having a president who admittedly perjured himself means that one hates civil rights. And that's what turns so many people off about the Clintons. They think that they are above ordinary ethical standards and only someone with partisan and despicable motives would doubt them.. . .

Survey: Clinton lead cut in half. From July 4, before the bomb dropped.
Posted by Fritz at 1:06 PM