Kaine and Unable at Clinton.com

A little cleanup in the email scandal aisle before we get on to the VP pick: Exclusive: Hillary Clinton exchanged top secret emails on her private server with three aides

The 22 emails were sent and received by Clinton in 2011 and 2012. Clinton discussed classified information with her deputy chief of staff, Jacob Sullivan, her chief of staff, Cheryl Mills, and Deputy Secretary of State William Burns. A majority of the top secret emails are email chains between Sullivan and Clinton.

This is the first time the State Department has revealed the identities of the officials who exchanged classified information with Clinton through her private email server.

The only thing shocking to me was that she carried out State Dept. business at all. I figured she'd delegate all that icky stuff out to Huma or some intern while she stuffed the coffers of the Clinton Foundation.

Now, onto Kaine: NYT: Hillary picked Kaine to narrow gap with white males … and due to her “responsibility gene” If she has a responsibility gene, it's recessive and heterozygous. And, yeah, it's pretty obvious part of the Kaine strategy is to take white men off their guard. Don't be fooled! According to the WaPo Kaine’s VP pick greeted by blowback from progressive groups. Althouse: Tim Kaine: "I’ll enforce the death penalty as governor and I’m against same-sex marriage." But back in that era, Obama and Hillary said the same things. Michael Moore on Kaine Pick: Progressives Will ‘Stay Home’ Have another doughnut, pal. Instapundit shouts: YOU DON’T HAVE TO FALL IN LOVE, YOU JUST HAVE TO FALL IN LINE: Clinton VP pick could face liberal ire. 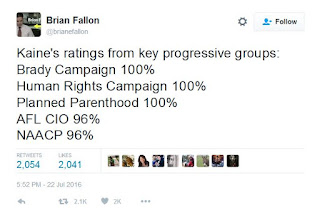 On the other hand, other than his last name not being Warren or Sanders, I don’t know what the left is losing much sleep over:


The vetting correspondence highlights a February 2016 Miami Herald article, which claims federal prosecutors were “cowed by Epstein’s high powered attorneys, including Roy Black.” It goes on to say that that was part of the reason the billionaire sex offender received an extraordinarily lenient sentence despite reportedly abusing at least 34 underage girls.

DNC APPROVED PLANTING SATIRICAL CRAIGSLIST AD TO MOCK TRUMP, LEAKED EMAILS SHOW - Fictitious job listing says Trump "may greet you with a kiss on the lips or grope you under the meeting table" But no dirty tricks from the left. But, we can count on the press to police them, right? Leaked emails reveal Politico reporter made ‘agreement’ to send advanced Clinton story to DNC:


An influential reporter at Politico made an apparent “agreement” with the Democratic National Committee to let it review a story about Hillary Clinton’s fundraising machine before it was submitted to his editors, leaked emails published by WikiLeaks on Friday revealed.

The email’s subject line read: “per agreement … any thoughts appreciated.”

Maggies Farm: Press conspired with DNC and Clinton to destroy Sanders. Bernie Sanders Campaign Chief Says Someone Must Be 'Accountable' for What DNC Emails Show Accountability? You want accountability? Maybe you should have thought about that before you endorsed her. One Bernie Bro finds out the hard way: VIDEO: Protester shouting ‘DNC leak!’ ejected from Hillary rally

Via Instapundit: TWO FORECASTS for the Democratic Convention.


In many ways I expect the Democratic National Convention to be more of the same. Oh, I doubt that the convention will blazon the Clinton name larger than the American flag across the stage as she speaks. But you can expect her to paint a republic in crisis, one where women are practically indentured servants of their male managers, where the police routinely use civilians for target practice, and of course, where Republicans roam among us, tirelessly impoverishing the poor and oppressing the oppressed. Who can save us now? Only one person, of course. It’s a bird! It’s a plane! It’s — HILLARY RODHAM CLINTON!
That case will, of course, be a lot more challenging to make given that Barack Obama has been president for eight years — which is why to hear Democrats talk, you’d often think that George W. Bush was just completing his fourth term in office. So they will spend the week pinning America’s flaws on Republicans.

So it’s business as usual, then.

Evidence of brain damage? Hillary Clinton's strange convulsions during interview - tries to play it off.

Pretty odd, but I think it's just a startle response.

That was quick! Linked at Pirate's Cove in The Fine 15 of this week's "Sorta Blogless Sunday Pinup" and links. Thanks, Teach!
Posted by Fritz at 8:39 AM