Putting the Con in DNC Convention with Clinton.com

After all the sturm und drang at the RNC convention, the liberal media was looking forward to making the DNC conventions look like skittles and rainbows at the coronation of Hillary. Alas, All Hell Broke Loose. as DNC Protests Reveal Another Party In Crisis and Democrats in disarray on eve of convention to nominate Clinton. Outside the hall, street protesters shouted "Fuck You Debby" as Pro-Sanders Protests Take Striking Anti-Clinton Tone. In the hall, Bernie's kids booed Debbie Wasserman Schultz off stage, the California delegation booed Clinton, chanting "Count our votes", they booed the mention of Hillary Clinton in a prayer, shouted "Lock Her Up" and they even booed Bernie Sanders  when he told them to elect Hillary. Not even Saint Elizabeth Warren was spared as they  Heckled Her With Chants of ‘We Trusted You!’ During DNC Speech. Susan Sarandon rips 'disgusting' DNC. All this was after the DNC prostrated itself before the Bernie Bros, begging for forgiveness. According to Jazz Shaw, The #NeverHillary faction at the DNC is a fascinating group. 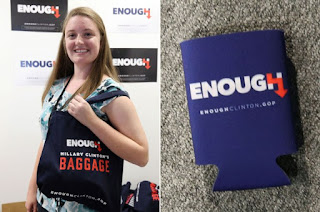 Even some Republicans joined in the fun: There’s some outrageous anti-Hillary swag at the DNC


GOP trolls have flocked to the Democratic convention and are handing out swag bags to Hillary haters — with goodies including rigged dice, microfiber towels dubbed “secret server wipers,” an official “HRC redaction pen” and a boxing-glove-shaped stress ball that says “fighting for Herself.”

Gotta get me a set of those dice.

Democratic emails: all about the hack, the leak, the discord. The Wikileaks scandal of DNC leaked emails still brewing, the party lurched through Three Different leaders in 24 hours as Debby was deposed, Donna Brazile stepped forward, and then was swept up in the Wikileaks and implicated in stacking the deck against Bernie, and finally they found someone named Marcia Fudge, who probably doesn't know how to use email. She's so unknown, the press doesn't agree on whether she's "Marcia" or "Marsha", but she issued a call for "The Unity Report" anyway. One new revelation was a DNC Memo Complains Gay Donor Is ‘Extremely High Maintenance’ and "too much work for what he is worth (maybe a 5k check).” Another memo from National Finance Director of the DNC said "I love you too. No Homo!" Why is the DNC such a hot bed of anti-LGBTQRSTUVWXYZ hate? We demand his immediate resignation and banishment to sensitivity training. Counting their chickens before they've hatched, other Leaked DNC Documents Show Plans To Reward Big Donors With Federal Appointments. Emails revealed the some journalists checked their stories with their masters at the DNC before they submitted them to their own editors: Politico’s Ken Vogel Filed Story with DNC Before His Own Editors. Instapundit Shouts:


WASHINGTON POST’S JULIET EILPERIN TO DNC: STORY ‘RUNNING ON A1 TOMORROW… YOU ALL WILL BE TOTALLY FINE WITH IT.’

Meanwhile at the American Thinker, “In short, [Greg] Sargent is a DNC-Clinton shill on the payroll of the Washington Post.”

The leaks also revealed that eco-warrior Bernie Sanders wanted a private plane as part of his terms of surrender to endorse Hillary. To cut the chase: HERE IT IS=> Detailed List of Findings in Wikileaks DNC Document Dump. It's an amazing list; I hope they keep it updated.

Speculation over the source of the leaks abounds. The FBI is on the case. US officials warned DNC of hack months before the party acted. Most of the speculation centers around the Russian spy apparatus, with the Democrats and NYT trying to make lemonade by speculating that Putin is interfering in the US election in an attempt to swing it to Trump. Maybe they've found the the Clintons don't honor their deals. Or maybe as Instapundit suggests, they still expect her to win, and they're just subtly telling her they have the rest of her "deleted" emails, and they can release them at need.


Of course, Hillary could be harder to blackmail than Putin thinks — it’s hard to blackmail someone who has no shame, and who is used to escaping the consequences of her actions. And the press is, as usual, on Hillary’s side, soft-pedaling the WikiLeaks story while Twitter users accuse the platform of hiding it from the “trending” section.

And '60 Minutes' Doesn't Air Hillary Dodge About DNC Interference while Meet the Press Panel Gushes Over Dem Convention, No Mocking Hillary!  Don't Ever Change CBS!: CBS’s John Dickerson to Obama Yesterday: ‘Is Honesty Overrated as a Prez Quality?’ Free Speech For Me But Not For Thee

Unity! Al Gore cold-shoulders Dem convention — and Hillary. Well, he does have his global warming hustle to keep him occupied. "For the last year, I’ve been feeling the Bern. Relax, I put some cream on it." Said Sarah Silverman at the Democratic National Convention tonight. But never fear, Dismayed at Seeing a Fellow Liberal New York Billionaire Doing Better than he ever could Michael Bloomberg Will Endorse Hillary Clinton. Score another point it Trump's favor.

I'm so looking forward to reports from Day 2.
Posted by Fritz at 8:55 AM