If Imitation is the Sincerest Form of Flattery . . . 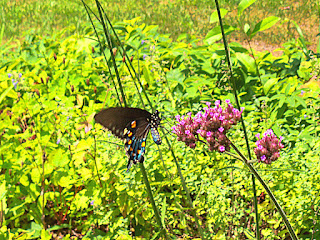 No butterfly is more flattered than the Pipevine Swallowtail. Which, by the way, visited our garden today, with at least two of them in sight at one time. 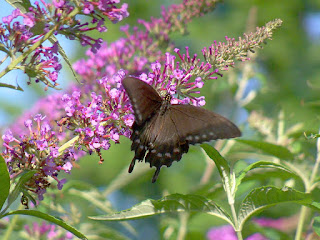 The two I saw didn't have a very well developed blue wash on the top of the wings that you often see. But it was good to see them. I've only seen a couple of them before, so either my eyes are improving (not very likely, and more likely the reverse), or they are having a good year. 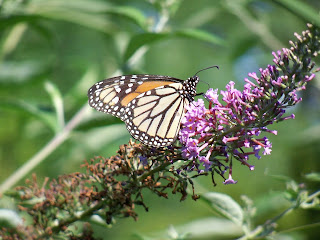 They weren't the only mimicry subjects to visit the yard today either. A Monarch fluttered in to the Butterfly Bush while I was trying to get photos of  one of the Pipevine Swallowtails. It was much easier to take photos of, as it lacked the annoying habit of fluttering while it was feeding. 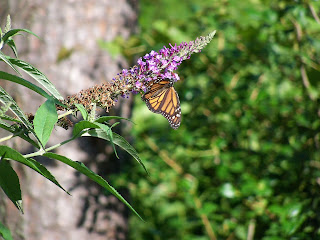 The monarch (Danaus plexippus) is loaded with toxic substances known as cardiac glycosides, which it acquires as a result of feasting on milkweed plants as a caterpillar. These substances render it unpalatable to many of its predators, and its brightly colored wings serve as a warning sign of its toxicity. For many years, it was thought that the viceroy (Limenitis archippus), which shares many of the same predators as the unpalatable monarch, mimicked the coloration of the latter to gain protection against predators.

This notion was reinforced in 1958, with the publication of a study in the journal Evolution that had been conducted by zoologist Jane Van Zandt Brower, who tested the palatability of monarchs and viceroys in a predator, the Florida scrub jay (Aphelocoma coerulescens). Caged birds that were fed monarchs discovered the butterfly’s unappetizing quality and quickly learned to avoid it, and when these birds were later fed monarchs and the similar-looking viceroys, they avoided both butterflies. In contrast, birds that were fed only viceroys ate the viceroys.

But there was another finding that emerged from the 1958 study—the viceroy, though more palatable than the monarch, was still less palatable compared with non-mimetic butterflies. And in fact, as caterpillars, viceroys feed on the leaves of willows and poplars, species that produce noxious chemicals to deter herbivores. Among the chemicals these trees produce is salicylic acid—the same, bitter-tasting compound from which the active ingredient in aspirin was derived.